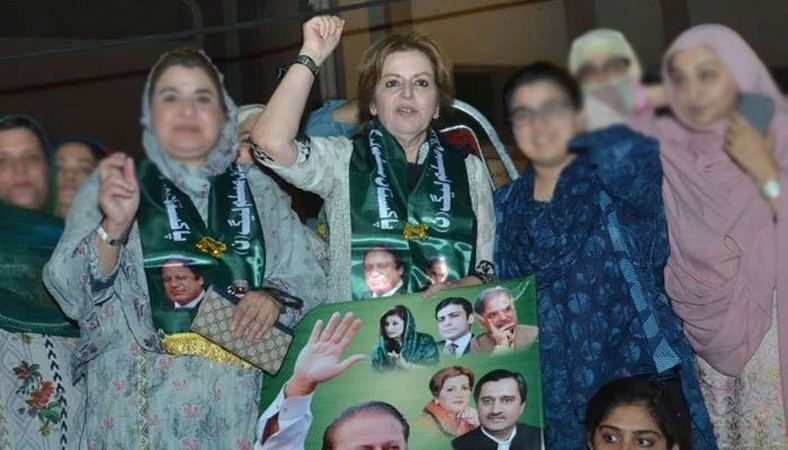 Amid a very low turnout, Shaista Pervaiz Malik of PML-N won NA-133 by-election on Sunday, according to unofficial results of all the 254 polling stations. The [NA-133] seat had fallen vacant after the death of PML-N MNA Pervaiz Malik on October 11.

Shaista secured a total of 46,811 votes, while the PPP candidate Aslam Gill stood second by grabbing a total of 32,313 votes.

Despite normal weather conditions in the city and weekly holiday of Sunday, the voters did not participate actively in the polling process and their turnout remained as low as 18.59 percent.

Polling started at 8am and continued till 5pm without break after which the gates to the polling stations were closed.

Polling stations saw a vote or two cast in the morning hours which increased to a few more by the afternoon. As time for the polling to end began to draw closer, voter participation improved slightly.

Celebrations broke out in the PML-N camp even as results for at least 10 polling stations were not in.

A statement was issued by the party on Twitter, quoting its president Shahbaz Sharif as congratulating all the workers. “I also congratulate the winning candidate Shaista Pervaiz Malk,” the statement quoted Shahbaz as saying. “The PML-N has proved in every by-election that it is the most popular party (in the country),” Shahbaz said.

The PML-N president said the people were “looking to PML-N” to solve all the deep crises that have befallen them.

There were 11 candidates, including the former seat holder’s widow, Shaista Pervaiz Malik and PPP’s Aslam Gill. The PPP actively campaigned for the by-election in the hope of reviving the party in Punjab.

The PML-N has retained the seat thrice in the past with Pervaiz Malik winning it in 2018 with 89,699 votes, Waheed Alam Khan in 2013 with over 100,000 votes and Naseer Bhutta in 2008 with a margin of over 32,000 votes. After the Election Commission of Pakistan rejected the nomination papers of PTI candidate Jamshed Iqbal Cheema and his covering candidate, his wife Mussarat Cheema, no PTI candidate was in the race.

Talking to a TV channel, PTI Central Punjab President Ijaz Chaudhry said since his party had no candidate in the field, they will not vote for anyone.

“Today’s election is a black spot in the name of the electoral process,” he said. PPP President Punjab Raja Pervez Ashraf, in a message to the people of the constituency on the occasion, said: “Allah has given NA-133 voters a chance to decide their own destiny”. “PPP is the only party that can alleviate the sufferings of the people,” Ashraf said. “Only PPP can end inflation, unemployment, lawlessness, uncertainty,” he added.

PML-N President Shahbaz Sharif had appealed to the voters to turn up in droves to cast their vote. “The people with the power of their vote should stand tall and become an obstacle in the way of inflation, economic devastation and unemployment,” the official PML-N Twitter account quoted him as saying. “The people must not be fooled by talk, claims, and slogans; they must vote by performance,” he said.

Shahbaz said “under the leadership of former prime minister Nawaz Sharif, the PML-N is the only party that can provide relief to the country and its people”. “I appeal to the people to come out of their homes from every nook and corner and play their role in bringing a change,” he said. The PML-N president instructed party leaders and workers to remain active in facilitating voters at the polling stations.