* 'I was telling my mom about how I have a date this week and my dad suddenly comes out of nowhere,' Sophia shared of one recent encounter 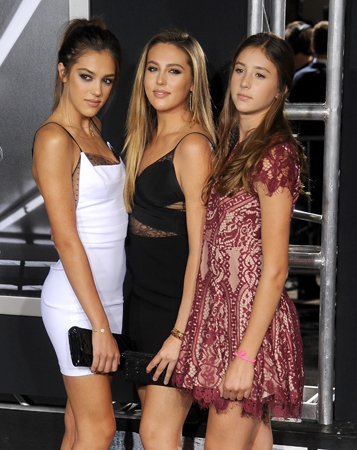 Ding! Ding! Ding! Sylvester Stallone has some knockout dating advice. In a recent video clip from their podcast, Unwaxed, released Thursday, Dec. 2, two of the Rambo actor’s daughters, Sophia Stallone, 25, and Sistine Stallone, 23, revealed that their dad has imparted what they called some seriously “Shakespearian” guidance about the game of love.

“I was telling my mom about how I have a date this week and my dad suddenly comes out of nowhere,” Sophia shared of one recent encounter. “He’s like, ‘can I just butt in here?'”

Sophia compared her dad’s advice to having “golden nuggets” of wisdom dropped on her about the search for Mr. Right.

“He was saying about being patient for the right one,” she explained. “And that the way that the guy treats you early on really is an indicator of how his overall personality will be in the relationship.”

Sistine seemed to agree with her father, sharing that it was important “not rushing love” but rather “just waiting for it to come.”

According to Sophia, the 75-year-old actor mentioned that love doesn’t operate on a set timetable and instead to look for what’s most important in a relationship, adding, “He said it might be next week or when you’re 35 years old, but choose happiness and true compatibility than chasing the clock.”

It appears that Sylvester is putting the dating knowledge he’s gained throughout his life to good use. The Rocky actor had been in multiple high-profile relationships, including two previous marriages with photographer Sasha Czack and actress Brigitte Nielsen, before he married his wife Jennifer Flavin in 1997.

Talking about their dad’s solid advice inspired Sistine to invite him back onto their podcast so he could impart his dating wisdom on a larger audience than just his kids.

“We’re gonna do another episode of Sly,” she announced, “and we’re gonna make it more dating, relationships, fatherly advice.”