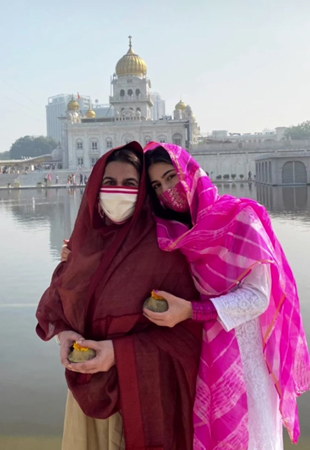 Actor Sara Ali Khan has reached New Delhi on Saturday for promoting her upcoming film ‘Atrangi Re’. The actor seized the opportunity to explore the city and went to seek blessing at the Bangla Sahib Gurudwara with her mother Amrita Singh. Taking to her Instagram Story, Sara shared an adorable picture with her mother, where they are seen in front of the Gurudwara. Sara also went to grab a kulfi at the India Gate, posing with her friend and actor Janhvi Kapoor. Sara has delighted the audience as Rinku in the trailer and her song ‘Chaka Chak’. Sara will be seen in ‘Atrangi Re’, co-starring Akshay Kumar and Dhanush. The Aanand L Rai directorial is set to release on December 24 on Disney+ Hotstar.