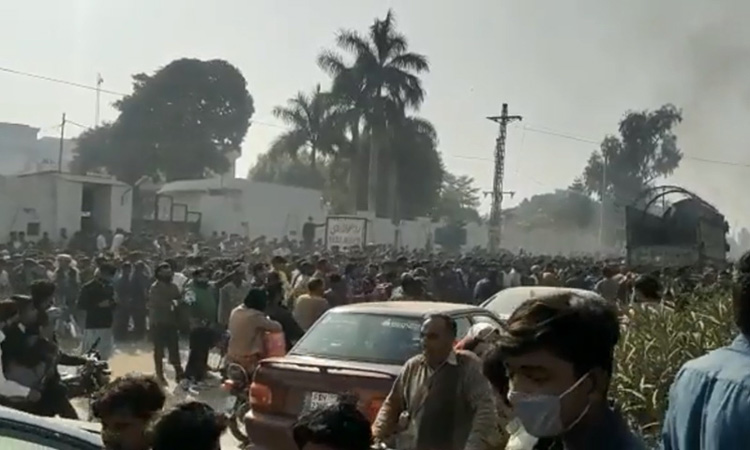 A Sri Lankan factory manager was Friday beaten to death and set ablaze by a mob on Wazirabad Road in Sialkot in an incident linked to alleged blasphemy.

Several gruesome video clips shared on the social media showed a mob beating the victim, identified as Priyantha Kumara, while chanting slogans against blasphemy. Other clips showed his body set ablaze, as well as the overturned wreckage of what was said to be his car. Many in the mob made no attempt to hide their identity and some took selfies in front of the burning corpse, say media reports.

District Police Officer Omar Saeed Malik said the workers of the factory severely beat the foreigner, leading to his death. The employees also vandalised the factory and blocked traffic, according to the police. Upon receiving a report of the incident, a heavy contingent of police reached the spot and tried to control the situation.

Prime Minister Imran Khan said he would personally oversee an investigation into the “horrific vigilante attack” which he also called “a day of shame for Pakistan”.

“Let there be no mistake all those responsible will be punished with full severity of the law,” he tweeted. “The cold blooded murder of Srilankan Mr Priyantha Kumara by a mob at Sialkot is extremely condemnable and shameful. Such extra judicial vigilantism cannot be condoned at any cost,” COAS Gen Qamar Javed Bajwa said, and directed all-out support to the civil administration to arrest perpetrators of this heinous crime and bring them to justice.

Chief Minister Punjab Usman Buzdar said he was extremely shocked at the horrific incident adding that no one was allowed to take the law into their own hands. Special Representative to Prime Minister on Religious Harmony Tahir Ashrafi said the killing of the factory manager over alleged blasphemy was regrettable and condemnable. He said the Pakistan Ulema Council strongly condemned the Sri Lankan national’s murder.

He said those responsible will be arrested and justice served. Ashrafi said the country had laws that dealt with blasphemy and by taking the law into their own hands, the attackers had insulted the law as well. “Those who killed the Sri Lankan manager in Sialkot have committed an un-Islamic, inhumane act,” he added. Later, addressing a press conference, Ashrafi, on behalf of Pakistan and all schools of thought and people of all religions in the country, condemned the act. “In fact, I believe, those who have committed this act brought disrepute to Islam and to Pakistan,” he said.

“Those who have acted in this manner have neither served Islam, nor Pakistan. In fact, they have opposed the teachings of the Holy Prophet (PBUH) and his code of conduct,” he said. Amnesty International’s South Asia division issued a statement saying it was “deeply alarmed by the disturbing lynching and killing” of the Sri Lankan over a blasphemy accusation.