* Sell-off marks the largest single-day decline in a day's worth of trading at PSX during 2021 calendar year, and third largest in history 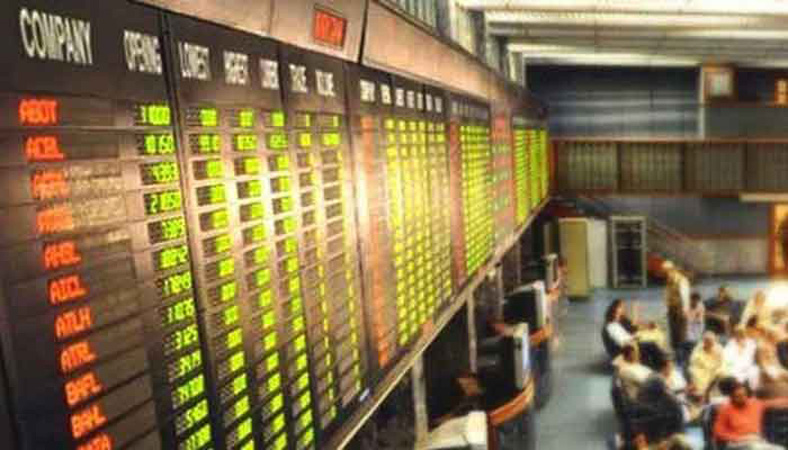 Thursday turned out to be disastrous for trading as a massive sell-off saw more than 2,100 points wiped off the benchmark KSE-100 index.

The sell-off marked the largest single-day decline in a day’s worth of trading at the PSX during the 2021 calendar year, and the third largest in history.

Cements bore the brunt of the selling, with Lucky, Maple Leaf, DG Khan and Cherat Cement all closing at their lower circuit breaker.

Tech, exploration and production and fertilizer scrips did not do any better, levelling heavy blows to the index, reports the media.

Volumes were up 60% from just a day earlier as investors panicked and rushed to get out of their positions. Of the 366 scrips traded in the day, 335 closed red.

“The import bill (trade deficit) was way beyond the market expectation, which shocked investors and they offloaded stocks,” he said, explaining that a higher current account deficit increases the expectation of a policy rate hike and a subsequent rise in the cost of doing business.

According to BMA’s Capital Executive Director Saad Hashemy the investors took a negative cue from T-bill auctions. “The figures, of the 3, 6 and 12-month T-bills [auctioned] were around 75-100 bps higher than in secondary markets, which led to the bloodbath,” he said.

“Secondly, the higher-than-expected trade deficit added fuel to the negative sentiment,” the analyst said, adding that investors weighed the chances of a massive interest rate hike during the upcoming State Bank Monetary Policy Committee meeting this month. “Going forward, the market is expected to consolidate as valuations are attractive,” he predicted.

Intermarket Securities’ head of equities Raza Jafri cited the widening trade deficit as the reason behind the plunge, saying it will keep the rupee under pressure and lead to “aggressive” increases in the interest rate. “However, it is important to keep in mind that authorities have already commenced macro-course correction while global commodities are coming down due to Omicron [variant of the coronavirus]. There may be an element of one-offs in November imports too and coming months may show better numbers,” he added. The downturn in the market may be treated as an opportunity, he said.

The view was also shared by CEO of Topline Securities Mohammad Sohail who said the “shocking” import bill in November, coupled with the central bank’s “aggressive borrowing” in yesterday’s T-bill auction were behind the nosedive. Meanwhile, AKY Securities Chief Executive Officer Amin Yousuf noted that stock markets across the world were bearish on the back of countries imposing restrictions to control the spread of the Omicron variant. A similar effect was also seen at the PSX, he added.