The move of Queen Elizabeth inspired Harry and Meghan to leave The Royal Family: Book 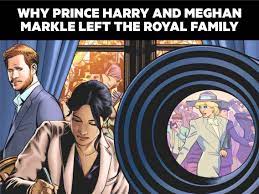 According to a new book, Queen Elizabeth’s decision to withdraw a painting of the Duke and Duchess of Sussex and their 8-month-old son Archie from the Royal Collection prompted Prince Harry and Meghan Markle to resign from the royal family.

According to a new book titled Brothers and Wives: Inside the Private Lives of William, Kate, Harry, and Meghan, Prince Harry and Meghan Markle were prompted to leave the royal family after Queen Elizabeth made a huge snub.

According to the book, the 95-year-old monarch “looked over the tables where the images she had so meticulously selected were set,” citing a source. “That one, I think we don’t need that one,” she replied later, pointing to the Sussex painting.

It further stated that Queen Elizabeth asked to remove the portrait from her desk off camera before she recorded her 2019 holiday broadcast.

The Post quoted a spokesperson for the Queen, “We don’t comment on books of this kind as to do so risks giving it some form of authority or credibility.”

According to the author, Prince Charles inquired about the child’s “complexion.”

While speaking to reporters in Barbados, Prince Charles’ spokesman dismissed the storey, adding, “This is fiction and not worth further comment.”