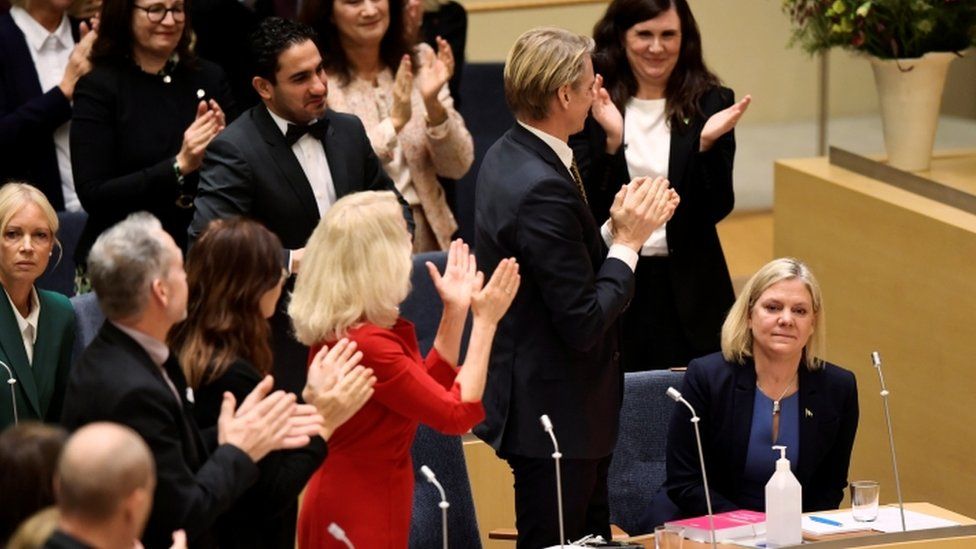 Sweden‘s Prime Minister-elect Magdalena Andersson on Wednesday handed in her resignation hours after being appointed by parliament, after her budget failed to pass and the junior Green Party quit the coalition government.

While her stint was unexpectedly brief, Andersson made history by becoming the first woman elected to the post of prime minister in Sweden — she was to formally take over on Friday.

The 54-year-old economist who has served as finance minister for the past seven years said she hoped to be elected to the position again soon as the head of a minority government made up of only the Social Democrats.

“There is a constitutional practice that a coalition government should resign when one party quits,” Andersson, a Social Democrat, told reporters.

“I don’t want to lead a government whose legitimacy will be questioned.”

Just hours earlier, parliament had elected Andersson after she clinched a last-minute deal with the Left Party to raise pensions in exchange for its crucial backing in Wednesday’s vote in parliament.

But the small Centre Party then withdrew its support for Andersson’s budget, due to the concessions made to the Left, leaving her budget with insufficient votes to pass in parliament.

Andersson grudgingly said she would still be able to govern with that budget.

But in an even heavier and surprise blow, Greens leader Per Bolund said his party could not tolerate the opposition’s “historic budget, drafted for the first time with the far-right”, and quit the government.

Among other things, it could not accept the opposition’s planned tax cut on petrol, which it said would lead to higher emissions.

Speaker of parliament Andreas Norlen said he had accepted Andersson’s resignation and would contact party leaders before deciding Thursday how to proceed.

Sweden‘s largest daily Dagens Nyheter said in an editorial that the turn of events could end up beneficial for Andersson, whom the Greens have vowed to support in a new prime ministerial vote.

“The Social Democrats can have all the cabinet posts and avoid all the compromises with the Greens,” it noted.

Despite being a nation that has long championed gender equality, Sweden has never before had a woman as prime minister.

After her election, Andersson called it “a special day”, coming 100 years after the Scandinavian country allowed female suffrage.

All other Nordic countries — Norway, Denmark, Finland and Iceland — have seen women lead their governments.

Andersson took over as leader of the Social Democrats earlier this month from Stefan Lofven.

He resigned as prime minister on November 10 after seven years in power in a widely expected move designed to give his successor time to prepare for the country’s September 2022 general election.

The change in leadership comes as the Social Democrats currently hover close to their lowest-ever approval ratings with elections less than a year away.

Meanwhile, the right-wing opposition, led by the conservative Moderates, has in recent years inched closer to the anti-immigration Sweden Democrats and hopes to govern with its informal backing.

Andersson, a former junior swimming champion, has been nicknamed by the media as “bulldozer” and is often described as “pragmatic” and a “technocratic bureaucrat”.

After being confirmed as the Social Democrats’ leader, she outlined her political priorities as moving away from the recent privatisation of the welfare sector — schools, healthcare and elderly care — and making Sweden a global role model in climate transition.

She also vowed to end the segregation, shootings and bombings that have plagued the country in recent years, usually due to gangland rivalries or organised criminals battling over the drug market.

Crime and immigration are expected to be among Swedes’ main concerns in next year’s election.