LG polls in Punjab to be hold in March-April 2022: sources 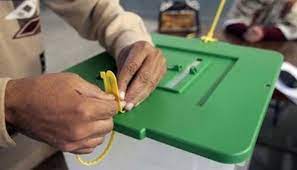 LAHORE: According to reliable sources, the Punjab government has decided to hold local body elections across the state in March or April 2022.

Well-placed sources said the provincial government will get the new Punjab Local Government Act 2021 passed from the assembly in the days to come.

As per the draft of the new local body act, at least 11 metropolitan corporations will be established in the province.

Besides the 11 metropolitan corporations, 15 municipal corporations and 35 district councils will also be set up in the province under the new local body act. All local representatives, from the councillor to the city mayor, would be elected through a direct vote.

In addition to this, over 6,000 village and neighbourhood councils will be established, while each village will have its own panchayat across the province.

Each village panchayat will comprise five members and it will be given powers as well as financial grant, sources said, adding that the body will decide minor disputes among villagers and will address other issues like street lights and provision of potable water to the people.

Earlier, the PTI had formed a consultative committee to decide tickets for the upcoming local government elections in Punjab.

Sources had said the committee on local body elections has been formed on the directions of Prime Minister Imran Khan.

The panel would furnish proposals on the distribution of tickets and the selection of candidates. It will also give suggestions on seat adjustments to like-minded parties.

Earlier, Prime Minister Khan directed Punjab Local Government and Community Development Department Minister Mian Mahmood ur Rasheed to hold Local Bodies elections in Punjab early and to complete all arrangements and legal proceedings in this regard.

The directives were issued by the prime minister during his meeting with the provincial minister who called on him at the Prime Minister’s House here on Sunday.

The gathering covered the election of Local Bodies in Punjab as well as other national problems. The premier was also told that the Punjab Local Government Act 2021 needed to be passed by the Punjab Assembly as soon as possible.