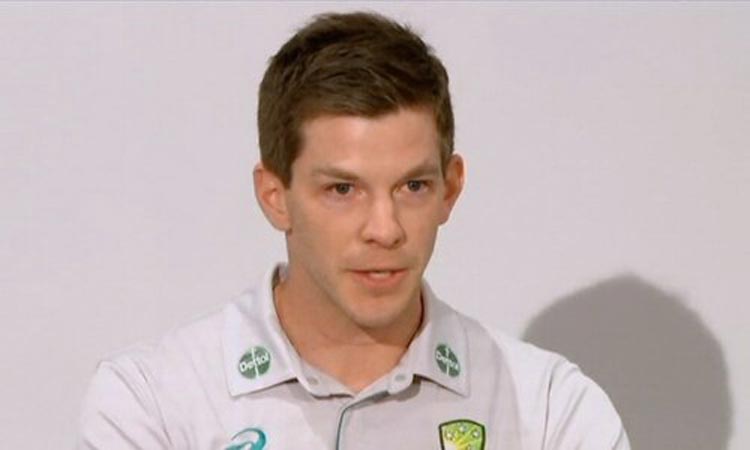 SYDNEY: Distraught and in tears, Tim Paine stepped down as Australia’s Test cricket captain on Friday after revelations he had been investigated and cleared over sexually explicit text messages sent to a female former colleague four years ago. The development has plunged Australia’s Ashes preparations into disarray three weeks before the first Test in Brisbane starts on Dec 8. Breaking down in tears while reading from a statement in Hobart, Paine said he was cleared by a Cricket Australia Integrity Unit investigation but his actions did not meet the standards of an Australian cricket captain or the wider community.

“I’m deeply sorry for the hurt and pain that I have caused to my wife, my family, and to the other party,” said Paine, who was married to wife Bonnie in 2016 and has children with her. “I’m sorry for any damage that this does to the reputation of our sport and I believe that it is the right decision for me to stand down as captain, effective immediately. “I do not want this to become an unwelcome disruption to the team ahead of what is a huge Ashes series.” Shortly before Paine’s admission, Melbourne’s Herald Sun newspaper reported the Tasmanian had sent lewd messages and an explicit photo to the colleague four months before he was appointed Test captain in the wake of the Newlands ball-tampering scandal in 2018. The report said the woman was a Cricket Tasmania employee who resigned in 2017 and later complained to the state governing body and to Cricket Australia. “We thought this incident was behind us and that I could focus entirely on the team, as I have done for the last three or four years,” said Paine, who declined to take any questions. “However, I recently became aware that this private text exchange was going to become public.”

Cricket Tasmania said the woman had not made her allegations against Paine until after she was charged with theft in mid-2018. Cricket Tasmania Chairman Andrew Gaggin said in a statement that the investigation had found Paine’s “interaction” with the woman to be “consensual, private, occurred on the one occasion only, was between mature adults and was not repeated.” Gaggin added that criminal charges against the former employee were still pending and it was inappropriate to comment further given the matter was before the courts.

Wicketkeeper-batsman Paine, 36, becomes the second Australian captain in succession to lose his job amid scandal, after Steve Smith stepped down for his involvement in a ball-tampering controversy during the Test series in South Africa. Paine resigns after 23 Tests as captain, with 11 wins, eight losses and four draws. He said he would still make himself available for selection. Vice captain Pat Cummins will be expected to take the captaincy from Paine ahead of the five-Test Ashes series. That would make Cummins the first specialist fast bowler to take the role since Ray Lindwall led Australia in one Test against India in the mid-1950s. Cricket Australia (CA) said it accepted Paine’s resignation and would name a captain soon. “While the board acknowledges an investigation cleared Tim of any breach of the code of conduct regarding this matter some years ago, we respect his decision,” CA Chair Richard Freudenstein said in a statement. “CA does not condone this type of language or behaviour.”