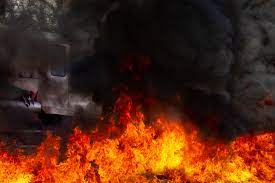 Karachi: On Sunday evening a fire broke out at Cooperative Market near Regal Chowk in Karachi’s Saddar.

Pakistan Navy spokesperson said that the assistance provided for firefighting was provided at the civil administration’s request.

Commissioner of Karachi Muhammad Iqbal Memon and personnel of various law enforcement agencies had visited the site to observe the firefighting operation.

The Karachi commissioner said that the inferno had been declared a “third-degree fire”.

He said that around 300-400 shops in the market caught fire out of which “35 had been completely gutted”.

As per details, 90% of the market and warehouse were destroyed and a loss worth Rs5-10 billion has been incurred.

It would be premature to comment on the cause of the fire , the chairman said when asked for the reason.

Later on, the traders, whose businesses were reduced to ashes in the Cooperative Market fire a day ago, have cited a short-circuit as a possible reason behind this incident.

The affected shopkeepers said that the fire erupted on the ground floor and shortly spread to the first floor.There was a huge stock of cloth inside the shops there.

They claimed that the fire tenders arrived an hour after the fire broke out and said that major losses could have been averted.

They had said that the fire broke out in one shop and soon engulfed several other shops in the market.

The fire department officials said that firefighting teams from different fire stations of the city along with four fire tenders were sent to the spot immediately.

The owners of the shops are trying to remove leftover stock from the market, while some part of the market is still blazing under fire as rescue operations continue.