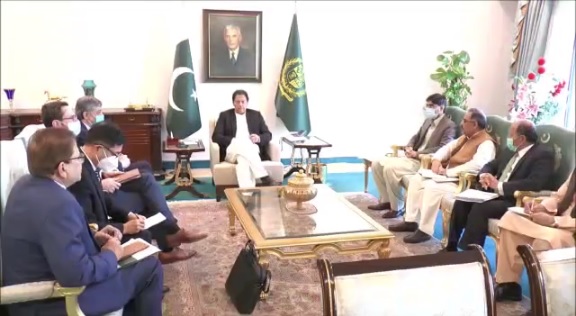 The prime minister, in a meeting with Special Representatives of Troika Plus on Afghanistan, hoped that the international community would recognize the gravity of the situation and take urgent measures including release of frozen assets to help alleviate the sufferings of Afghan people. He also highlighted the crucial role of Troika Plus in this context. The special representatives/envoys of Troika Plus included those from China, Russia, United States, and Pakistan.

The prime minister called on the international community to have a pragmatic approach and constructive engagement with Afghanistan to address mutual concerns and promote the common interests of Troika Plus countries.  Underscoring the importance of the Troika Plus mechanism, the prime minister congratulated the special representatives/envoys on its successful meeting in Islamabad regarding the situation in Afghanistan and the way forward to overcome the impending challenges.

He underlined the importance of peace and stability in Afghanistan for security and prosperity of the entire region. The prime minister said he had consistently stressed that there was no military solution in Afghanistan. As such, Pakistan had all along supported an inclusive political settlement. In the changed environment, he underscored the importance of inclusivity, respect of human rights, and resolute counter-terrorism actions.