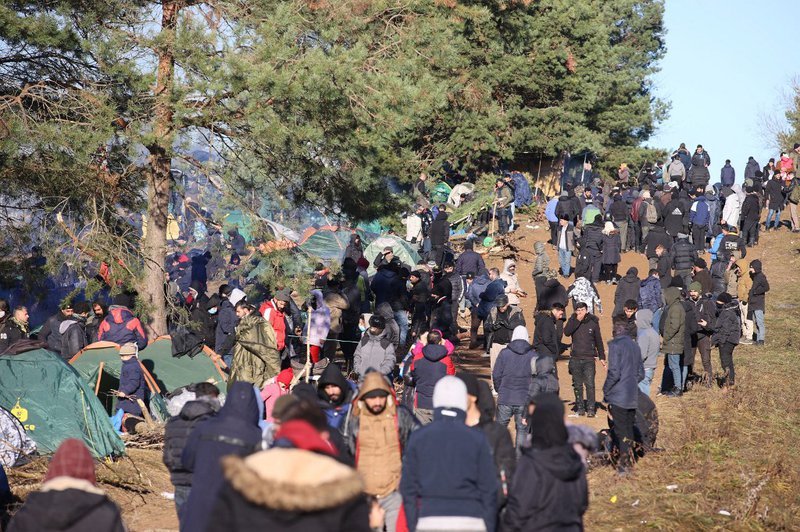 The United States and European delegations on the UN Security Council condemned on Thursday Belarus’s behavior in the migrant crisis on its border with Poland.

Poland says the government of strongman Alexander Lukashenko has lured about 2,000 migrants, mainly Kurds from the Middle East, to Belarus for the purpose of sending them across the border into Poland and thus the EU in revenge for sanctions. These people are now living in a tent camp on the border in near-freezing temperatures. Poland refuses to allow them in.

After an emergency meeting on the crisis, the Western delegations at the Security Council issued a joint statement condemning “the orchestrated instrumentalization of human beings whose lives and wellbeing have been put in danger for political purposes by Belarus.”

They said Belarus is doing this with “the objective of destabilizing neighboring countries and the European Union’s external border and diverting attention away from its own increasing human rights violations.” The statement made no mention of Belarus ally Russia, which before the meeting rejected western allegations that it was working in conjunction with Minsk to send the migrants over the EU’s eastern border into Poland.

“This tactic is unacceptable and calls for a strong international reaction and cooperation in order to hold Belarus accountable,” the Western statement said without mentioning any kind of concrete measures to punish Belarus. “It demonstrates how the Lukashenko regime has become a threat to regional stability. We call on the Belarusian authorities to stop these inhumane actions and not to put people’s lives at risk,” it added.

Russia’s deputy UN ambassador Dmitry Polyanskiy said “no, absolutely not” when asked about Western charges that Russia and Belarus are sending migrants into Poland. Asked about flights of Russian fighter jets over Belarus, he said this was in response to what he called a massive build-up of Polish forces on the border.

“We have our obligations also within the unity between Russia and Belarus. So if there is a buildup of military resources on the border with Belarus, we have to react. This is just reconnaissance flights, nothing more than this,” he said. Asked if the deployment of Russian forces on the border with Ukraine meant Russia planned to invade its neighbor, Polyanskiy said: “Never planned, never did, and never will do, unless we’re provoked, of course, by Ukraine or by somebody else.