From Mian Channu to Latin America

* The book under review has been divided into three parts 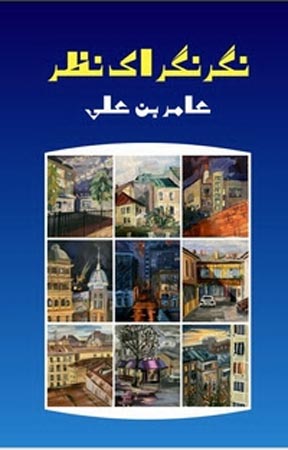 The travelogue titled ‘Nagar Nagar Ik Nazar’ is the third travelogue of Amir Bin Ali dedicated to his mother.

Hailing originally from a small town Mian Chunnoo in Punjab Province, Pakistan, his family business stretches its arm from Japan to Latin America. Amir Bin Ali’s group is involved in importing second hand cars. Stationed in Japan he has to travel abroad especially to Latin American countries. Yearly he comes to Pakistan where he meets his friends and family. While travelling, observing foreign cultures, meeting people of these civilizations that are almost hidden from the world arouse different sentiments in him that he transforms in the shape of travelogues. After sufficient material accumulates, he publishes it in the form of books. He is old Ravian which means that he studied in Government College, Lahore. In the introductory article written in the beginning of the book under review, Asadullah Ghalib, veteran writer and journalist has informed that Amir’s two books were published when he was a student of Government College Lahore.

Ali has given the story of a satisfied old couple who preferred to settle in a village in the desert of Chili in South America. The village Called Tarapaka houses settlers from the Spanish Christians with ample specimens of old civilisation. There are practically no business opportunities here but some people raise animals in the greenery and sell them. Tomb of Sufi Saint Lorenzo attracts a hundred thousand visitors every year. In another essay Ali discovers Latin styles of protests. Beating utensils with spoons to create noise is one way to protest. Then thirty or forty slow cyclists block a square that hinders traffic flow. The protests kill many by the government. Ali discussed the issue with his secretary who was of the opinion that most of the people did not want to work so they made money out of these protests. The first part also contains essays on Neruda, Lateerana Conference and Humber Stone, a city with English name near the borders of Bolivia. This city has been declared as a representative of old civilization.

Shifting his attention to the Middle East, Ali starts talking about Qatar, a small but very rich country due to gas reserves that he exports abroad from its terminal in Bin Saeed. Doha was also selected for 2022 world cup, the first Arab country to have got this honour and by now seven huge stadiums have been built. Ali however is more impressed by Islamic Arts Museum. This reviewer has also been to Doha many times to open Nespak’s office in Doha and recalls Ibrahim Jaida as our sponsors. Jaida is a leading architect whose designs starts the foundation of a tower in Doha’s old style architecture that suddenly takes the shape of a tall western like tower. He exhibits Doha’s sticking to its civilization but moving towards modern demands as well.

Ali now talks about centenary of Soviet Union. Many may not know that Soviet Union was once a super power. This country introduced the first astronaut in the skies. It influenced and ruled many countries including eastern European ones. Germany when divided had East Germany under its ideological influence.

Ali also writes on what he saw in West Indies, Dubai, Pakistan Centre in UAE and on Sajid Javed, member Parliament of Pakistani origin appointed as British Interior Minister. He also mentions that most Pakistanis who settled abroad worked as taxi drivers. Their off-shoots like Saeeda Warsi became member parliament.

In an interesting discourse Ali discusses expectations from Joe Biden as President of the US. Ali’s assessment is that under the rule of the present president the chances of physical war are remote. In an essay Ali shows his worries on a report by World Economic Forum on gender equality. According to the analysis Pakistan’s number is 148, only one step higher than Yemen. The area in which women participation has been judged is politics, economy, health and education. To this writer it seems not logical as women participation is much high in the areas of education, health and labour sectors. The ratio of nurses, doctors, teachers, women working in fields is quite sizeable. The news of three senior professors arrested by police from Punjab University in chains is quite disturbing to the writer. Apart from comparing economic future of India verses Pakistan and analyse the performance of interim governments, Ali shares his international experiences of spread of corona virus, especially when he was questioned by a worker on Santiago airport in Chili as to why was he returning to Japan where Corona had spread wildly. This was the first time that Ali had heard this name.

The second part of the book under review comprise 24 essays on the topics such as weather changing from summer to autumn, remembering atom bomb attack on Japan, new year celebrations in Japan, Whale caught from Philippines’s sea shores was found to have swallowed many plastic shopping bags. Despite our government banning the use of shopping bags in our country, our businessmen still use them. There are many other essays on Japan like presence of Urdu Bazar, newspaper distribution by drones’ anti-China collaboration etc.

The third part of the book comprising obituaries on Munnoo Bhai, Mashkoor Hussain Yaad, Major Mansoor, Mushtaq Ahmad Yousifi, Munir Niazi, Mazhar Bukhari and Ahmad Nadim Qasmi and young poet and writer Dr Fartash Syed dying of Corona. Amir Bin Ali has shared his experiences and emotions in this book. His personal repertoire with the intellectuals he met in his life has been discussed in easy flow language.