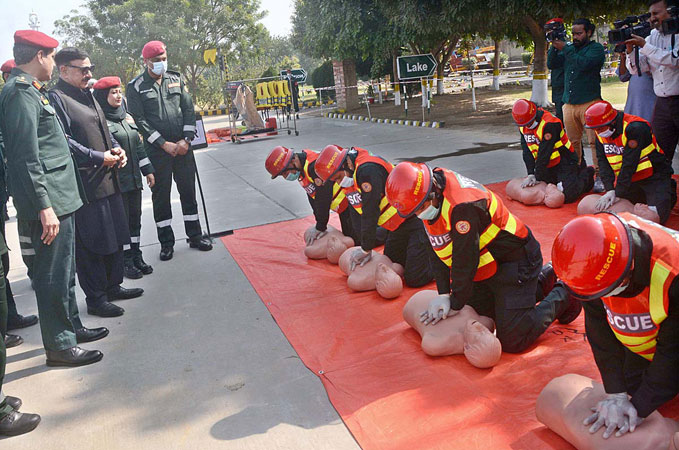 Interior Minister Sheikh Rashid Ahmad Thursday felicitated the Pakistan Rescue Team (PRT), saying it was a big honour that the Pakistan team was the first one in South Asia to obtain certification from the United Nations (UN) International Search and Rescue Advisory Group (INSARAG).

He said rescuers render precious services to save lives of people and help those in distress.

Sheikh Rashid appreciated the efforts of Dr Rizwan Naseer and his team over the milestone success.

He said the journey of emergency reforms, which started from the interior ministry, became available to the public in the form of Rescue Services and Emergency Services Academy.

He appreciated that the Punjab Emergency Service (PES) personnel had rescued more than 10 million people in distress since its inception, and the Emergency Service Academy provided training to more than 20,000 professionals from Punjab, Khyber-Pakhtunkhwa, Gilgit-Baltistan, Balochistan and Sindh to date.

Sh Rashid congratulated the team leader and deputy team leader of the Pakistan Rescue Team on establishing 36 Light Search and Rescue Teams in each district of Punjab as per standards of the United Nations for disaster response.

He said every member of the PRT deserved appreciation as everybody had a role to play in meeting international standards for emergency preparedness and response.

“We witnessed helplessness in the aftermath of 2005 earthquake when urban search and rescue teams were called in from abroad. Today, the Pakistan Rescue Team, under the dynamic leadership of Prime Minister Imran Khan, is ready to combat any situation which is a clear indication that the country is on the path of development”.

The minister said the government was planning to constitute Rescue-1122 service in capital city also, adding, “We will sign a memorandum of understanding (MoU) with the Punjab Emergency Service Department in this regard”.

He said that initially the federal government would provide 20 vehicles to Rescue service in Islamabad.

Later, while responding to the media queries, the federal minister said that Prime Minister Imran Khan

would complete his current five-year term, and get re-elected for another term also.