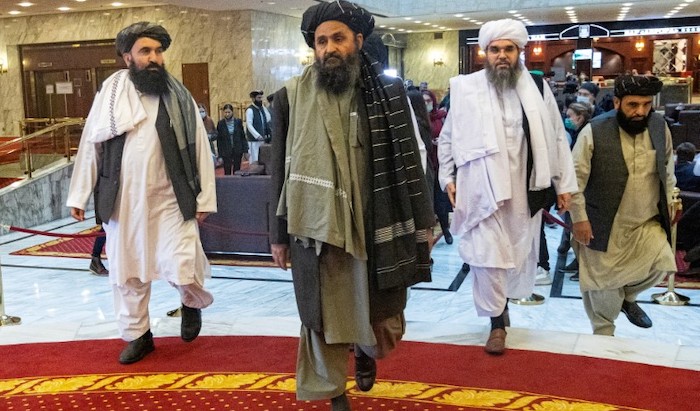 Akhundzada has been the spiritual chief of the Islamist movement since 2016 but has remained a reclusive figure, even after the Taliban seized power in Afghanistan.

His low profile has fed speculation about his role in the new Taliban government, formed after the group took control of Kabul in mid-August, and even rumours of his death.

On Saturday, he visited the Darul Uloom Hakimah madrassa to “speak to his brave soldiers and disciples”, according to the introduction to an audio recording circulated by Taliban social media accounts.

“May God reward the oppressed people of Afghanistan who fought the infidels and the oppressors for 20 years,” Akhundzada said, in the recording. “My intention here is to pray for you and you pray for me”.

In the 10-minute recording, he prays for the Taliban martyrs, wounded fighters, and the success of officials involved in the “big test” of rebuilding what they call the Islamic Emirate of Afghanistan.

“Let’s pray that we come out of this big test successfully. May Allah help us stay strong,” he said. There was tight security at the event and no photographs or video have emerged.

Akhundzada is referred to as “Amirul Momineen”, commander of the faithful, the rank conferred on the late Taliban founder Mullah Omar by his supporters.

Akhundzada is thought to have been selected to serve more as a spiritual figurehead than a military commander, but his unusually public statements will fuel speculation that he now plans to take a more central role in leading the new government.