* However, even with the love-at-first-sight, unrequited love, family-drama tropes in the story, the film is a definite catch 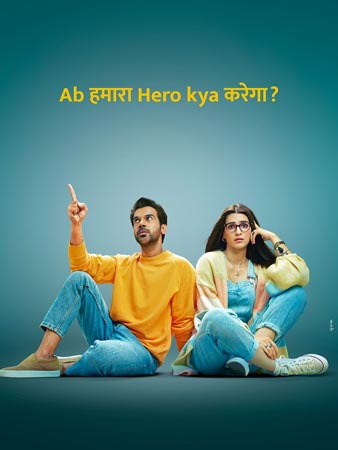 Kriti Sanon and Rajkummar’s rom-com ‘Hum Do Hamare Do’ is a breezy, masala family entertainer which will definitely tickle your funny bone at moments when you least expect it. While the plot of the film is unconventional, it is not unique enough to separate itself from the typical rom-com.

However, even with the love-at-first-sight, unrequited love, family-drama tropes in the story, the film is a definite catch. Why?

For starters, Abhishek Jain’s film stands tall on the shoulders of its actors with stunning performances from Rajkummar Rao, Paresh Rawal, Ratna Pathak and Kriti Sanon. It’s an absolute joy to watch them essay their roles, captivating all of your attention for the whole duration of the film.

In fact, the best-friend chemistry between Rajkummar Rao and Aparshakti Khurana is entertaining enough to have a spin-off!

Coming to the plot, the film revolves around Dhruv, an orphan who has always longed for and dreamt of having his own family. Years later, we meet a grown-up, dashing, rich and tech-savvy Dhruv who’s turned his life around completely.

At a tech convention for his VR device, Dhruv meets Anyaa and falls in love – reminiscent of every meet-cute ever.

The progression of their love story is quick-paced and mostly imminent as Dhruv confesses his feelings before Anyaa gets set up with another man and the duo decide to get married.

Although this sounds like the ending, it is where the drama unfolds in the film. After learning about Anyaa’s desire to have a perfect family, Dhruv feels pressured to lie to her about his family.

This is where Dhruv’s hilarious quest of searching for ‘fake parents’ begins with his best friend.

The two stumble upon ex-star-crossed lovers Purushottam Mishra and Dipti Kashyap who happen to live in the same city but apart.

Dhruv manages to bring them together by convincing them to play his parents in front of Anyaa and her family.

Paresh Rawal and Ratna Pathak’s love story runs parallel with that of Kriti Sanon and Rajkummar Rao and unravels, striking an emotional chord with audiences.

However, it’s not a tear-jerker but an enjoyable combination of drama and comedy as life often is.

All-in-all, it’s a fun take on how a family isn’t necessarily set in stone and bonds as strong as blood can be formed with people you choose to let into your life.