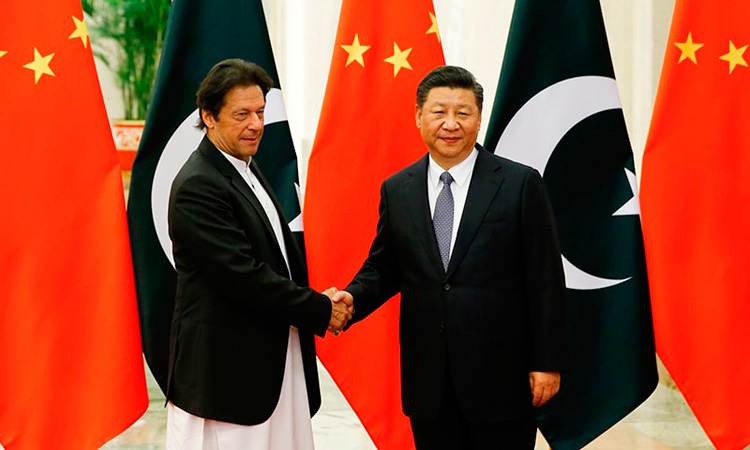 Chinese President Xi Jinping on Tuesday urged China and Pakistan to build a closer China-Pakistan community with a shared future in the new era.

“During the past 70 years since the establishment of China-Pakistan diplomatic ties, no matter how the international situation may change, the two sides have always stood side by side in weal and woe,” Xi noted in a phone conversation with Prime Minister Imran Khan. “China and Pakistan have worked together to tackle risks and challenges such as the Covid-19 pandemic, through which strategic mutual trust has been consolidated and strategic cooperation deepened,” he said, adding that history has fully proved that the two countries are each other’s most reliable iron-clad brother.

The Chinese president said the world is undergoing profound changes unseen in a century, with more sources of turbulence and risks around. “Under the new circumstances, the two countries should stand together even more firmly and push forward the all-weather strategic cooperative partnership, and build a closer China-Pakistan community with a shared future in the new era,” he added.

Xi Jinping stressed that China supports Pakistan in exploring a development path suited to its own national conditions and is willing to share China’s high-quality development opportunities with the country. “The two sides should maintain close strategic communication, further synergize development strategies and enhance the exchange of governance experience,” he further said. “China will continue to support Pakistan in its fight against Covid-19, jointly build the China-Pakistan Economic Corridor with high quality and strengthen cooperation in such fields as agriculture, digital economy and people’s livelihood,” he went on to say. “We will continue to unleash the positive effects of the corridor in promoting growth and improving people’s wellbeing,” he added.

Xi said the two sides should strengthen counter-terrorism and security cooperation. “China is ready to work with Pakistan to enhance multilateral coordination, practice true multilateralism and promote international fairness and justice, so as to safeguard the common interests of the two countries and maintain world peace and stability,” he added.

Prime Minister Imran Khan congratulated Xi Jinping and congratulated him on the centenary of the Communist Party of China, besides its unprecedented victory in eradicating absolute poverty. He appreciated China’s stellar development in four decades of reforms. The two leaders also felicitated each other on the important milestone of the 70th anniversary of the establishment of diplomatic relations between Pakistan and China, reviewed the entire gamut of the bilateral strategic cooperative partnership, and discussed regional and international situation. The prime minister appreciated China’s successful containment of the Covid-19 pandemic as well as relief and assistance measures for the developing countries, including the vaccine cooperation with Pakistan.

Taking stock of the negative impact of Covid-19 on the global economy, the two leaders agreed on further strengthening bilateral economic and commercial ties, including full realization of the potential offered by the Phase-II of the China-Pakistan Free Trade Agreement, to overcome the economic headwinds. The prime minister lauded the successful, timely and high-quality implementation of the CPEC projects, and welcomed Chinese investments in the CPEC Special Economic Zones. He underscored that early start of the work on the ML-1 railway project would complement Pakistan’s geo-economics vision for national and regional development.