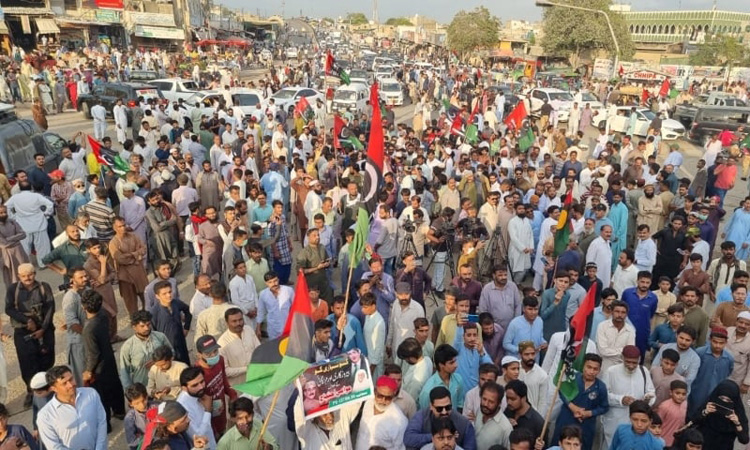 Opposition parties took to the streets in various cities across Pakistan on Friday to put pressure on the government amid growing inflation in the country, with Pakistan Democratic Movement (PDM) and the PPP staging separate anti-government demonstrations.

Protests were held in Karachi, Larkana, Lahore, Sukkur, Mardan, Jacobabad, Mohmand, Ziarat, Mingora and other cities of the country following a call by the opposition.

Addressing a protest gathering at Karachi’s Empress Market, Jamiat Ulema-i-Islam-Fazl (JUI-F) general secretary Maulana Abdul Ghafoor Haideri said that protests against inflation and the current government were a “public referendum”. The JUI-F stood in solidarity with the poor, farmers and lawyers, he said, adding that party chief Maulana Fazlur Rahman – who is also the PDM president – had announced nationwide protests from October 20. “Protests against inflation will continue,” he vowed.

He alleged that the entire country had been left at the mercy of the International Monetary Fund (IMF). “Prime Minister Imran Khan used to say he would commit suicide before going to the IMF. He had promised 10 million jobs [but] 16,000 people were let go in Islamabad.”

While speaking at another protest in Lahore, PML-N’s Saad Rafique said the people of the country were facing “back-breaking” inflation, unemployment, and lawlessness while also witnessing the degradation of state institutions. “Why are people dying of hunger? Why are they committing suicide? Why are they cursing the government? This did not happen overnight,” he said, adding that this was the result of targeting “elected representatives”.

He said that essentials had not just become expensive, they were “very expensive”. The PML-N leader also predicted another wave of inflation in the country in the aftermath of recent talks with the International Monetary Fund. He alleged that the premier did not fulfil promises made to the people and lied to them. “You dupe them and make empty promises. You are not capable of anything, and you have destroyed [the country].”

People shouted slogans against the government and rising inflation. Traffic at the Quetta-Chaman highway remained suspended for several hours due to the rally. In Karachi, the demonstration started near the Empress Market area, due to which the surrounding roads had to be sealed. In Lahore, PML-N members staged a protest against inflation at the Jain Mandir Chowk while carrying utility bills and pieces of rotis (bread) in their hands. Akin to that, party members in Muzaffargarh started a protest rally from Central Jamia Masjid to Qanwan Chowk. Members of the Jamaat-e-Islami also staged a protest in front of the Muzaffargarh Press Club during which they chanted slogans against inflation.

PML-N’s Qari Saifullah Saifi led the protest in Murree. When protesters reached the city’s Mall Road, many tourists also joined in. In Mardan, protesters started gathering at the city’s Kachehri Chowk, while in Gilgit, members of PML-N, as well as JUI, participated in the protest rally at Ittihad Chowk.

Separately, the PPP also held a protest in Karachi led by Sindh Chief Minister Murad Ali Shah against the rising inflation in the country.