Miley claps back at claims her voice sounds ‘like a man’

* 'My whole life, whether in vocal training or just continuing to hone my craft, it's always been about, Why do you sound like a man?' she said 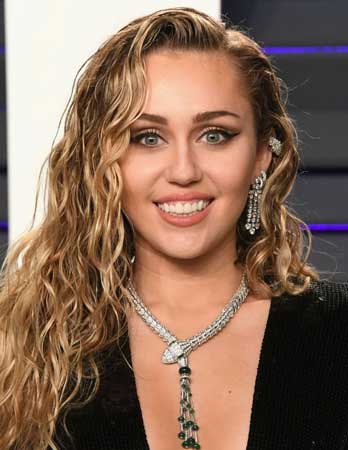 Miley Cyrus has found her true voice-and wants the world to know it. On Wednesday, Oct. 20, Interview magazine published its cover story: an interview Metallica drummer Lars Ulrich conducted with the 28-year-old musician. Cyrus, who has covered the metal band’s 1992 hit single “Nothing Else Matters,” talked to the fellow musician about the criticism she’s received over her singing voice, which has changed over the past year. “My whole life, whether in vocal training or just continuing to hone my craft, it’s always been about, ‘Why do you sound like a man? Where’s your f–king falsetto, bitch? Why can’t you sing the high octave of ‘Party in the U.S.A.’ anymore?'” she said. “In this song, I get to sing in that low register, and I get to live in that authentic, genuine sound.”

She continued, “My voice is how I represent myself. It’s how I express myself. I’ve worked with so many people who tell me, ‘We’re going to have to bring in a singer to hit those high parts.’ You know, ‘falsetto’ is this Latin term for when a boy goes through puberty, but they still want him to sing in the choir. It means ‘false’…I don’t have a false voice.”

Cyrus also told Ulrich, “You know me personally, we’ve hung at parties. I am who I am. I say what I mean in the moment, even if that changes tomorrow. I was honoured by the fact that I didn’t have to sing this song in the way that females are ‘supposed’ to sing. You can hear that at the end of the song, when I take the gloves off and just start flying. That part of the song really grabs people. It’s that lower register of my voice. So I’m grateful to have a song where I can lean into that.”

On the Joe Rogan Experience podcast last year, host Joe Rogan spoke to Cyrus and commented her “heavy voice,” which he said sounded different from when she was the star of the Disney Channel series Hannah Montana, which ended its four-season run in 2011.

“Over the last year, I noticed a really big change in my voice,” the singer said. “Kind of a heaviness to it. And I experienced some heavy things and so I feel like it is a reflection, it is kind of a scar in a sense.”

In 2019, the singer split from actor Liam Hemsworth, had a short romance with The Hills star Kaitlynn Carter and later dated Cody Simpson before they broke up after about 10 months. Also that year, Cyrus underwent vocal cord surgery after suffering from overuse of her voice.

“I had something called Reinke’s edema,” Cyrus told Rogan, “which, when my doctor told me about it, he said, ‘No one shy has this. This is for abuse of the voice. This is for people that talk way too f–king much and usually, this happens when you’re like in your 60s or 70s.'”

The singer continued, “I started touring at probably 12 or 13 and…the adrenaline that you have after a show, it’s not really the singing that affects your voice as much as its afterwards, you’re totally on and then it’s really hard to get that sleep-later, the talking all night turned into smoking all night and now this is kind of where we’re at.”

Cyrus compared a voice to a face. “It collects wrinkles and it tells a story,” she said. “If you look at yourself and you go, oh, I didn’t have this until this trip.

I sat out in the sun or I partied too much or whatever…there is such a kind of stigma with aging. It’s a very kind of scary thing, as a female in the industry.”