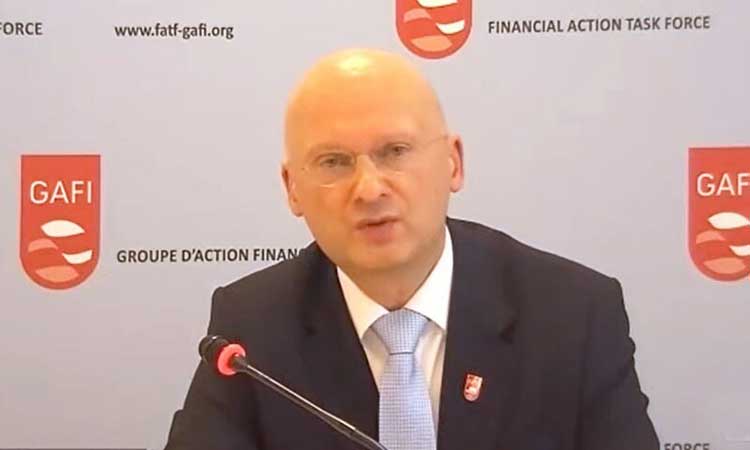 The Financial Action Task Force (FATF) on Thursday retained Pakistan on the grey list, while noting that ‘good progress’ has been made in completing the required action items for removal from the list.

At a post-plenary conference, FATF President Dr Marcus Pleyer announced that Pakistan remains on the “increased monitoring list”. According to the president, Pakistan has two concurrent action plans with a total of 34 action plan items. “It has now addressed, or largely addressed 30 of the items,” he said.

“It’s most recent action plan from June this year which largely focused on money laundering deficiencies was issued after FATF’s regional partner APG (Asian Pacific Group) identified a number of serious issues. Overall, Pakistan is making “good progress” on the new action plan, he said, adding that of the seven new items, four have been “addressed or largely addressed”.

He said this includes showing that financial supervisors are conducting on-site and off-site checks on non-financial sector businesses and enacting legislative amendments to improve international cooperation.

Dr Pleyer said Pakistan still needs to demonstrate investigations and prosecutions are being pursued against the senior leadership of UN designated terror groups. “I thank the Pakistani government for their continued strong commitment to this process.”

In a follow-up question and answer session, a journalist asked Dr Pleyer to comment on Pakistan’s concerns regarding there being “political connotations” for its continued presence on the grey list, especially in the backdrop of the Indian foreign minister, in July this year, openly saying that Pakistan is in the grey list because of India. In response, the FATF president said he would not comment on the Indian foreign minister’s statement. “FATF is a technical body and we take our decisions by consensus so it is not only one country. FATF consists of 29 jurisdictions and decisions are taken with consensus,” he said.

“The FATF has recognised considerable progress made by Pakistan on both the action plans,” the Ministry of Finance said in a statement issued after the press conference. It underlined that with regard to the 2021 Action Plan, Pakistan has completed four of the seven action plan items. Pakistan has completed these four action plan items “much before the timelines prescribed by FATF”, said the statement. “Progress on remaining three action items is well underway and it is aimed to complete the three action items ahead of the timelines set by the FATF,” the ministry said.

The action items that have been completed include amendments in the Mutual Legal Assistance Act, 2020, Anti-Money Laundering (AML)/Combating Financing of Terrorism (CFT) Supervision of Designated Non-Financial Businesses and Professions (DNFBPs), transparency of beneficial ownership information and implementation of Targeted Financial Sanctions for Proliferation Finance by DNFBPs.

The remaining action items in the 2021 Action Plan include investigation and prosecution of money laundering cases, confiscation of assets and UN listings. “Regarding the 2018 Action Plan, Pakistan submitted a comprehensive progress report on the last remaining Action Plan item,” the statement read.

The ministry said that FATF acknowledged Pakistan’s continued political commitment, which led to significant progress across a comprehensive CFT Action Plan and encouraged Pakistan to report further progress on investigation and prosecution. “The plenary meeting decided to maintain the status quo with respect to Pakistan, for the time being,” it said. Considerable work has already been carried out on the remaining items of both action plans, the ministry said. “FATF will undertake next review of Pakistan’s progress in February 2022,” read the statement. It added that Pakistan is fully committed to completing both its action plans in cooperation with FATF and its international partners. “The high-level political commitment, which is driving its revamped AML/CFT regime, is widely recognised by the international community,” the statement said.