* After the guest editorial, a section titled 'Lams Rafta' includes essays by Quratulain Haider on Sadeqain as a darwesh 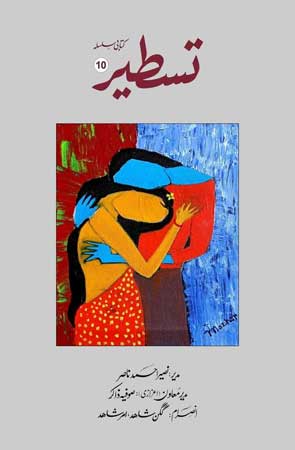 The literary periodical Tasteer’s 10th issue is a literary treat by editor Naseer Ahmad Nasir who is a profound poet of international fame.

Its 10th issue covers presentations of new and old subscribers in September, two thousand twenty one, published by Book Corner Jhelum. Naseer Ahmad Nasir is associated with Sofia Zakir and publishers are Gagan Shahid and Amar Shahid. Each issue of Tasteer is in book form since it was launched. It is considered as one of the best literary treat because of strong contents, variety of themes and variety of domains. It is always long awaited series by literary people all over the world, who are Urdu literature fans. This time, Calligraphic title cover has been contributed by Mazhar Shahzad from Bhalian, Vinhaar, Chakwal. Previously he has been contributing in the other magazines like Auraq, Fanoon. Asaar, Mahenau, Seep, Adbiaat and Tasteer in the domains of poems, short stories, columns and calligraphy. This issue of Tasteer pays tribute to late Hameed Shahid by quoting Anwar Masood’s stanza who says ‘Waheen Par Hei Taba’at Ka Woh Markaz/Jo Shahid Ki Mushaqat Ka Samar Hei/Buhut Mashoor Hei Ab Sheher Jhelum/Wohi Jhelum Jahan Book Corner Hei’. It may be noted that the publishers hail from Jhelum and have their book shop there. This book shop exists due to efforts and hard work of Hameed Shahid.

After the guest editorial a section titled ‘Lams Rafta’ includes essays by Quratul Ain Haider on Sadeqain as a ‘Darwaish Sift’ man. She is nostalgic about joining PECHS College in Karachi. Despite that it was a very expensive college as it was collecting heavy funds in the name of Building Fund every year. Still every student was desirous of taking admission there. Col. Majeed Malik’s wife Amna Majeed Malik administered this college. She remained in touch with her husband’s friends even after his death. Notable celebrities were Faiz whose ghazal ‘Gulon Main Rang Bhare’ used to be sung by Mehdi Hassan in his presence. Singer Afshan Ahmad was singing ‘Mere Bachpan Kei Din’ in Melody Maker Suhail Ra’ana’s music. Runa Laila was a student here. The author also came across other celebrities like Himayat Ali Sha’air, Shabnam Roomani, Z. A. Bukhari, Saroor Barabankwi, Jamiluddin Aali, Raju Jamil, Iftikhar Arif, Quraishpur, Ubaidullah Beg, Lady Nusrat A. Haroon, Lady Daulat Hidayat Ulllah, Begum Khursheed Mirza and Shaukat Parvez. Begum Alice Faiz being in-charge of Fine Arts Department was seen painting all day. Sadeqain would be seen converting poetry in painting on canvass. When he painted he came across lot of Cactus plant rather than flowers as Pakistan had lots of problems and very little sources to resolve them.

There are many ways to go through the journey of ‘Aagahi’ that is considered as reprimand of life. That has been so says Sarwer AlHuda in case of Shameen Hanfi. This state of mind is intensified more as one keeps on studying and absorbing more. Some manage to find a way out of this punishment

There are many ways to go through the journey of ‘Aagahi’ that is considered as reprimand of life. That has been so says Sarwer AlHuda in case of Shameen Hanfi. This state of mind is intensified more as one keeps on studying and absorbing more. Some manage to find a way out of this punishment. In case of Shameem Hanfi, this ‘aagahi’ was because of reading creative literature, what he calls as ‘Baseerat’ (wisdom).

Three essays by Rasheed Amjad appear in this section; one an unpublished short story titled ‘Gari kaun chala raha hei’ (who is on driving seat?), two analysis of Anwaar Fitrat’s poems, and three, Naseer Ahmad Nasir as a gigantic poem writer. In very simple words he explains the difference between ‘Paband Nazm’ (standard meters) which struggles to remain different from Ghazal that had fixed rhymes and meters; a difficult proposition because both domains follow the same grammatical rules. Modern poem concentrates on the philosophical approach tackled with variety of themes. The latter domain of saying poetry started with Meera Ji, Majeed Amjad, and Wazeer Agha and presently culminates at Naseer Ahmad Nasir, concludes Rasheed Amjad. He observes that basically Naseer is an imagist poet. The use of imagery and metaphors when appear in words, the poem itself takes the shape of a small short story. Musharaf Aalam Zoqi terms Naseer’s poetry carrying dreams within a dream. Tabasum Fatima feels that she and her fraternity meet dawn with Naseer’s poems.

A separate corner is dedicated to Shahid Hameed (Pages 87 to 108) wherein all the writers pay tribute to him. Mustansar Tarrer stated that he had an access to Hameed’s soul (Page 95). Khalid Masood Khan summarizes Shahid Hameed’s work from one anna library to Book Corner Jhelum. Dr. Inam ul Haq Javed is more specific and says that he was tycoon of books. Irfan Javed says that Shahid Hameed anything but miser. While thinking of Shahid Hameed. Mubashar Ali Zaidi thinks of a Books Center in which among the bookshops he watches in dreams he comes across Shahid Hameed in Book Corner, founder of this shop. Husnain Jamal writes that all he could cherish was half meeting where all he remembers is smiling face (Page 106). He has written a long concluding obituary on Shahid Hameed. In a chapter on taking interview on writers’ childhood, Uzma Salim writes on poet Amjad Islam Amjad. A separate titled Covid 19 covers eleven poems by Gulzar (Page 16). He says in his poem titled ‘Lockdown Again’ that after every eight days, my captivity is increased as rods of my cage are changed. Jalil Aalli and Akhtar Shumar remain content in autobiographies. To add to the variety of domains of work, Nasir Baghdadi contributes translation of Oscar Wild’s Picture of Dorian Grey (Page 145). Three short stories and three brief short stories are presented from page 156 to 303. Ghazal section presents poetry of Ehsan Akbar, Jalil Aali, and Abid Sayal. Nazm is specialty of Naseer Ahmad Nasir and those of Jamil ur Rehman, Jawaz Jafri, Tanvir Qazi and Khushbakht Bano up to page 351. A section titled ‘Sunehri Khazan Ka Phool’ (Canada Sei) (flower of golden autumn from Canada) comprises eleven poems of Gul Rukh Kazmi.

The most important part of Tasteer has always been research, criticism and philosophy. The September issue presents talk on existentialism by Iqbal Afaqi and postmodern criticism by Nizam Siddiqui. Qazi Afzaal Ahmad in his well-researched essay titled ‘Ghair Ki Tashkeel’ concludes that in literature concept of ‘Ghair’ (outsider) is different from the concept in other areas of general knowledge. A writer or a poet resists accepting building the concept of ‘Ghair’ by foreign groups has least impact. Attiq Ullah discusses Russian ‘Heyatpasandi’. Nasir Abbas Nayyar is more specific when he explores the link between language, stereotypes and literature (Page 408). Zafar Sipple writes on Marx. Qazi Jamal Hussain writes on Bedi and Rawish Nadeem on Manto. M. Khalid Fayyaz compares the problems of Shameem Hanfi and Manto’s visions. Aurangzeb Niazi wonders when invasion engulfs him. Iqra Ghaffar discusses the present status of beauty.

Ghazals of lot many more poets form most of the concluding portion of Tasteer Volume 10 (Pages 588 to 598 and 655 to 674). Muhammad Izhar ul Haq’s poetry emphasizes more on the socio-economic disparities rather than going for the traditional romantic tradition. The other contributors are Khwaja Waheed, Ilyas Baber Awan, Neelum Malik and Muhammad Masud Akhtar. In the second portions of Ghazals 35 contributors present their creations. Saleem Kauser, Naseem Seher, Ashraf Javed are included in the 35 poets, Translation, which is a very difficult proposition in carried out by sixteen writers of the works done by others. Like the previous issues, the present issue of Tasteer presents literature emanated in the recent past which is a tremendous effort to keep abreast with their counterparts abroad in other languages and themes.