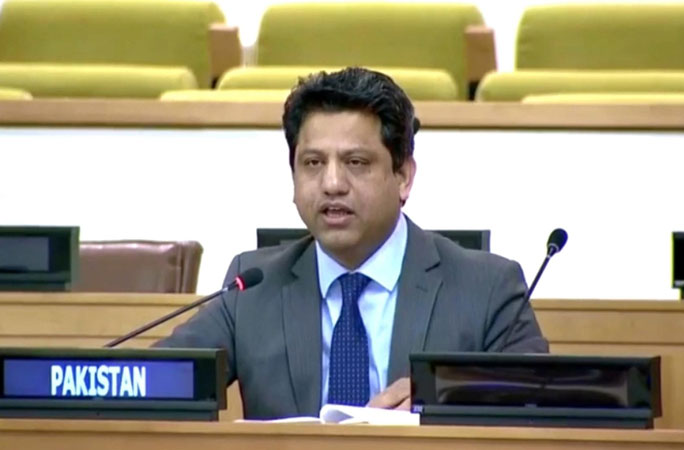 Pakistan has urged the UN human rights chief to hold India accountable for its “systematic” violations in occupied Jammu and Kashmir, saying failure to do so would further erode the credibility of her office. During an interactive dialogue with the UN High Commissioner for Human Rights, Michelle Bachelet, Ambassador Amir Khan, Pakistan’s deputy permanent representative to the UN, updated her on the continuing Indian human rights abuses, and demanded a probe.

The dialogue took place in the UN General Assembly’s Third committee, which deals with social, cultural and humanitarian issues. While thanking the High Commissioner for highlighting India’s multiple violations of the Kashmiri people’s rights in the Geneva-based Human Rights Council, the Pakistani envoy said he had hoped that her office would include the widespread violations committed by Indian occupation forces in her report. Some of the gross violations, he pointed out, include: siege of occupied territory by a 900,000 occupation force; issuance of 4.2 million fake domicile certificate to bring about demographic change; mass blinding through the use of pellet guns and thousands of extrajudicial killings.

He added that there were also massive arbitrary detentions; demolitions of homes and properties; extensive torture; use of rape as a weapon of war; enforced disappearances and discovery of mass graves; crackdown on human rights defenders, journalists and the media; and internet and telecommunication blockades. Aside from the two reports of 2018 and 2019 of the Office of United Nations High Commissioner for Human Rights (OHCHR), human rights organizations and international media continue to report on these violations, Ambassador Aamir Khan underlined.

Meanwhile, UN Special Procedures Mandate Holders had declared that the human rights situation in Kashmir was in “free fall”.

“This is the behaviour of the so-called largest democracy of the world,” the Pakistani envoy said, adding that it has embarked upon imposing Hindutva ideology on minorities and continues to reject any access to independent media, human rights organizations or to the OHCHR.

“In line with the prevention mandate of the OHCHR, we urge the High Commissioner to promptly investigate and report on ethnic cleansing, crimes against humanity and war crimes in occupied Kashmir, before it is too late.”

In conclusion, the Pakistani envoy asked the High Commissioner when would the next report on human rights situation in Jammu and Kashmir be issued by OHCHR.

He also inquired about the measures the OHCHR had undertaken for the implementation of its recommendations contained in the two reports on Jammu and Kashmir of 2018 and 2019?

In addition, Ambassador Aamir Khan asked the High commissioner whether OHCHR was pursuing grant of access to Jammu and Kashmir for UN Observers, Special Procedures and human rights organizations with the Indian government.

In response, Bachelet said her office will continue seeking meaningful access to both sides of the disputed Kashmir region. “We encourage both countries to accept this,” she added.