Complexity of ‘Dune’ rewards fans of the novel

* Dune has plenty of room for long conversations between characters, using the space efficiently to introduce nuanced relationships between them 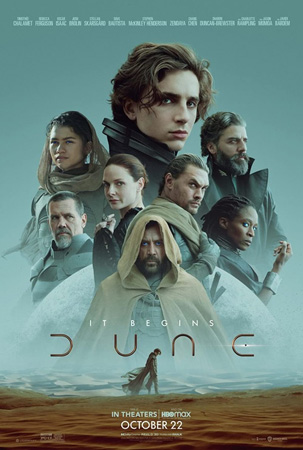 When you read a lot of genre fiction, or even regular literary fiction that leans toward the complex, you hear the word “unadaptable” a lot. Tons of Stephen King books are “unadaptable.” Thomas Pynchon is “unadaptable.” House of Leaves is “unadaptable.” For decades, Frank Herbert’s audacious science fiction masterwork Dune was considered unadaptable, and then, in 1984, David Lynch’s attempt proved that to be more or less true. It’s so dense, and there is just so much detail to get across to your audience, even in the background exposition before you get to the actual narrative. Nevertheless, it’s one of those books that is so beloved and influential, it’s always in the back of Hollywood’s mind, waiting to be put to screen once again.

Denis Villeneuve, having proven himself with his Oscar-nominated Arrival and improbably fantastic Blade Runner sequel, was handed the reins to take another shot at it, this time separating the story into two parts-the first of which comes out October 22 in theaters and on HBO Max. Dune, technically titled Dune: Part One introduces a universe ruled by a substance so precious, noble families wage war upon each other to gain control of it, until one family realizes the true scope of the wealth buried beneath the sands of one desert planet. It feels like the movie that fans of the novel have been waiting for. Everyone else’s mileage may vary.

The year is 10191 and humanity is ruled by a planetary Imperium that tracks and manipulates the relationships between the noble houses, shifting families back and forth according to the Emperor’s whims. The favor now seems to land on House Atreides, who has been gifted control and residency of the planet Arrakis, also known as Dune, covered as it is with desert from pole to pole. Dune is the home of spice, a substance that allows the members of the Spacing Guild, who take it as a drug, to jump through space, transporting people and materials all around the galaxy. Whoever controls spice production on Arrakis will become very rich indeed. But the Atreides family and their vassals need to tread lightly: The gift of Arrakis is definitely a test, and likely a trap, overseen by the Atreides’ powerful enemies, the brutish House Harkonnen.

Duke Leto Atreides (Oscar Isaac) and his family, Bene Gesserit (an order of genealogy-obsessed sorceresses) concubine Lady Jessica (Rebecca Ferguson) and their fey son Paul (Timothée Chalamet), arrive on the planet ready to ally themselves with the blue-eyed Fremen, the native human population who have developed ways of surviving in the wasteland, building “stillsuits” that recycle the body’s water and walking in odd ways so as not to attract the attention of the giant sandworms that swim beneath the desert’s surface, plaguing spice mining equipment and swallowing anything in their path. Before they can accomplish much, Baron Harkonnen (Stellan Skarsgård) and his forces, led by the sadistic Beast Rabban (Dave Bautista) wreak havoc, changing the course of the Atreides family’s fortunes. What they don’t count on is the hidden power of the Atreides son Paul, who has a connection to the Fremen deeper than any of them suspect.

As you can probably tell by the two whole paragraphs of plot description, Dune is complex. And, again, this is only the first part, setting up the exposition needed to understand what’s going on and then cutting off about halfway through the novel, as Warner Bros. prefers to wait to see how this movie does before allowing Villeneuve to film Part Two. What’s impressive about this movie is how straightforwardly it sets up everything you need to know, giving plenty of context to bizarre phrases like “Kwisatz Haderach” and “gom jabbar” so that anyone paying attention can pretty competently follow what’s going on. It also has plenty of room for long, involved conversations between characters, using the space efficiently to introduce nuanced relationships between them-during a ceremonial meeting, Duke Leto mutters to his Warmaster Gurney Halleck (Josh Brolin) to smile, and Halleck responds, stonefaced, “I am smiling.” The friendship between Paul and jovial swordmaster Duncan Idaho (Jason Momoa) is particularly rich. Villeneuve uses these interactions sparingly, but they breathe life into a story that could very easily become extremely dry and dull.

That’s what’s impressive about Dune: To make a film this straightforward out of some of the densest material in science fiction is a feat, and one that Villeneuve and his actors accomplish pretty much without a hitch. As long as you’re paying attention, you’ll get it. Conversely, if you don’t feel like paying attention to what’s going on, the movie is a true feast for the eyes (and the ears, thanks to some garish sound design and Hans Zimmer’s booming score). Building interiors are stark, angular, shadowed; spaceships are chunky, loud, and tangible; costumes are extravagant, with voluminous flowing veils, comically high headdresses, and tubes poking out of every fold. Airships are outlined by searchlight beams cutting through thick mists, miles of sand vibrate in waves as worms pass underneath.

Dune can’t really be called “accessible,” because the novel itself isn’t what we’d call accessible, either. Audiences who are predisposed to find fascination with its complex political intrigues and gibberish phrases will enjoy it, those who already don’t like those things likely will not, and those on the fence are hard to predict. The movie, like the novel, makes you work a little for its affections, and will reward you for the effort. Bigger rewards will likely come in the sequel, adapting the more psychedelic, more out-of-this-world material of the book, which makes Dune’s current situation (a dense space opera released simultaneously in theaters and on streaming) more than a little precarious. Dune: Part One will leave fans not only wanting, but hoping for more. The spice, in other words, must flow.