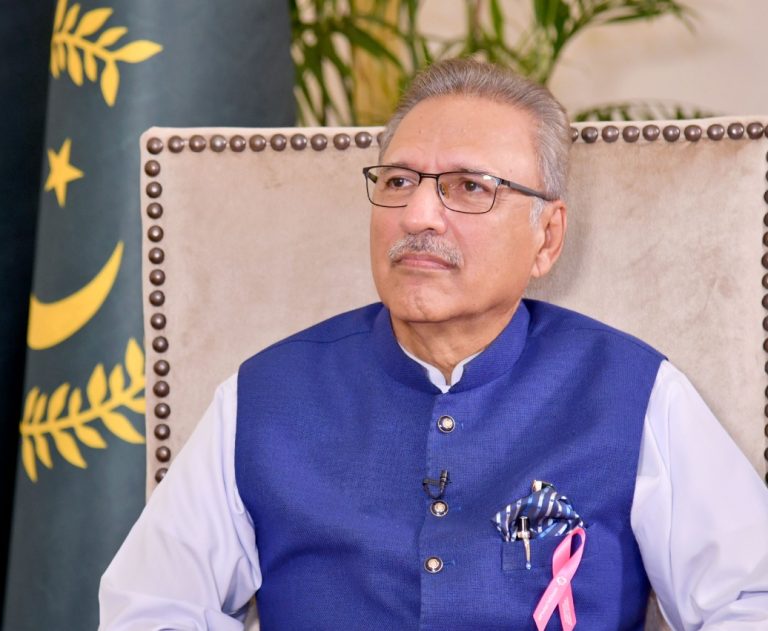 ISLAMABAD: President Dr Arif Alvi while rejecting the appeal of ex-Assistant Director NAB, Muhammad Umair has urged NAB to prosecute him to the maximum extent of the law on account of him being guilty of grave “inefficiency and misconduct”, and stealing 15 original deeds of property in reference no. 15/2019 (State v/s Sharjeel Inam Memon & Others).

The President upheld the maximum service punishment in law of “major penalty” of “dismissal from service”, which he considers definitely not enough considering the crime involved, a press release issued by the President’s Media Wing here on Monday said.

Muhamamd Umair, ex-Assistant Director (AD), had submitted an appeal to the President of Pakistan against the orders of Chairman National Accountability Bureau (NAB) imposing a major penalty of “Removal from Service”.

Rejecting the appeal, the President stated that it was a case of blatant corruption, and was tantamount to throwing mud in the eyes of the people of Pakistan who had been betrayed.

He said that Pakistan had suffered a great deal because of corrupt looters and plunderers, adding that so-called accidental fires destroy entire floors to remove every bit of evidence.

The President added that documents were stolen even in foreign countries where corruption of Pakistani politicians was being investigated.

According to the details, NAB had taken possession of 15 original deeds of property from the Secretary of Sharjeel Memon, Izhar Hussain, at the time of his arrest from his house in April 2019.

Subsequently, the documents were kept in a steel Almirah in NAB which had been specifically provided to ex-Assistant Director, who was made the sole custodian of these documents.

On 18th August 2020, the Defence Counsel claimed before the court that NAB did not possess the original documents, in response to which Mr Umair promised to bring them to court the following day.

On 19th August, the appellant told the court that he had lost the record in his office. This lapse resulted in the instant relief and granting of post-arrest bails to the accused persons.

According to the fact-finding report, all the record was present but only the most important 15 original documents were removed cleverly from the file and were recovered only after pressure was brought upon the NAB official.

NAB had recommended an immediate suspension of Mr Umair, along with initiation of disciplinary proceedings under NAB Employees Terms and Conditions of Service (TCS) 2000 and proceeding under section 31(a) of National Accountability Ordinance, 1999. He was placed under suspension for three months with effect from 03-09-2020.

In the light of the report of the Fact-Finding Inquiry Committee, it was decided to proceed against the officer under clause 11.05(2) of NAB’s TCS-2002 and issued him the show cause notice.

After the fulfilment of legal requirements, Chairman NAB, on the recommendations of the Authorised Officer, awarded a major penalty of “Removal from Service” on Mr Muhammad Umair under clause 11.03(1) (b) (iii) of NAB Employees Services Rules (TCS 2002).

Subsequently, the ex-Assistant Director submitted an appeal to the President of Pakistan on 28-07-2021.

While rejecting the appeal of Mr Umair, President Dr Arif Alvi stated that the incident was shocking and documents were missing not as an accident but by deliberate action of a very corrupt official of NAB.

He expressed surprise over the timing of the theft, adding that the theft was clever and the file was not lost.

He observed that theft could not have been done by any outsider but only by someone who was totally aware of the entire case.

The President said that it was very painful case for him and the criminal action caused huge damage of billions of rupees to Pakistan, besides betraying our trust and exchanging it for corrupt money.

“I, therefore, reject the appeal and urge NAB to prosecute the individual to the best of its abilities”, the President noted.