Some girls return to high school in Afghan province 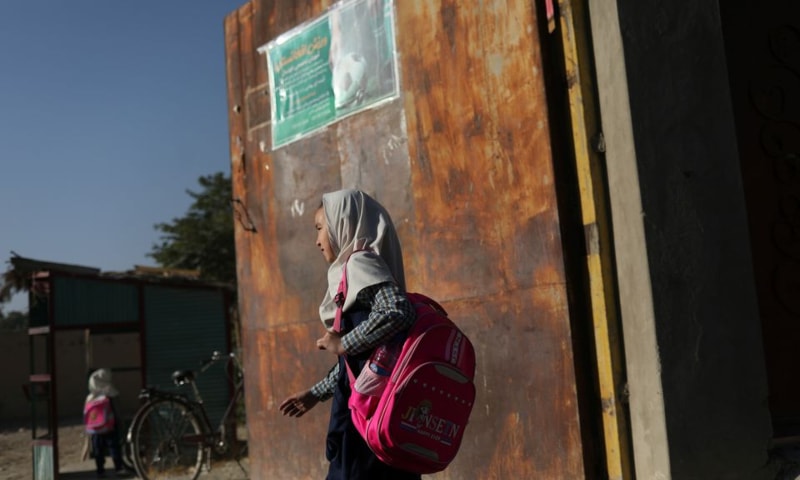 KABUL: Girls have returned to some secondary schools in a northern province of Afghanistan, Taliban officials and teachers said Tuesday, but they remain barred from classrooms in much of the country.

Dozens of girls in black, some wearing white headscarves and others with black face veils, sat in chairs waving Taliban flags, in a video posted by the hardline group’s spokesman Suhail Shaheen. “Girls are going to high schools in Khan Abad, Kunduz Province,” tweeted Doha-based Shaheen, who has been nominated as the new Afghan government’s permanent representative to the United Nations. But in Kabul, education ministry official Mohammad Abid said there had been no policy change from the Taliban’s interim central government,  “High schools still remain closed for girls.”

The Taliban, notorious for their brutal and oppressive rule from 1996 to 2001, has faced international fury after effectively excluding women and girls from education and work across the country. Seven weeks after seizing power and pledging a softer version of their previous regime, the Islamist hardliners have incrementally stripped away Afghans’ freedoms. The Taliban permitted girls to attend primary school from the start, but have maintained that neither they nor their female teachers could return to secondary school yet.

They have said girls can return to high school once their security and strict gender segregation under the group’s restrictive interpretation of sharia law can be ensured. Last month Taliban spokesman Zabihullah Mujahid told a press conference that work was “continuing over the issues of education and work of women and girls”, saying schools will reopen “as soon as possible”, without providing a timeframe. “More time is needed… instructions on how to deal with their work, their services, and their education are needed because the system has changed and an Islamic system is in place.”

A Taliban member is interviewed on camera saying girls and boys from grades seven to 12 are at school in the district, adding “there are not any issues for anyone so far”. A headteacher in Kunduz city, the provincial capital, told that girls in a high school in the Imam Sahib district had gone back to classes. Another teacher in Kunduz also said other high school girls had returned. “Our principal informed the Directorate of Education at Kunduz and requested them for instructions,” the fourth-grade teacher told, speaking on condition of anonymity.

“They replied that the ban on school girls is only applicable to other provinces, and not Kunduz.” The Taliban have also restricted women’s access to work. The group imposed an extreme interpretation of sharia law during their last period of rule and this time round has said progress in women’s rights will be respected “within the framework of Islamic law”.

The revelation that some Afghan girls were returning to secondary school came on World Teachers’ Day Tuesday. “For girls’ education, female teachers play an even more important role in Afghanistan,” the UN children’s agency’s country office tweeted, calling for the help, encouragement, and protection of female teachers.