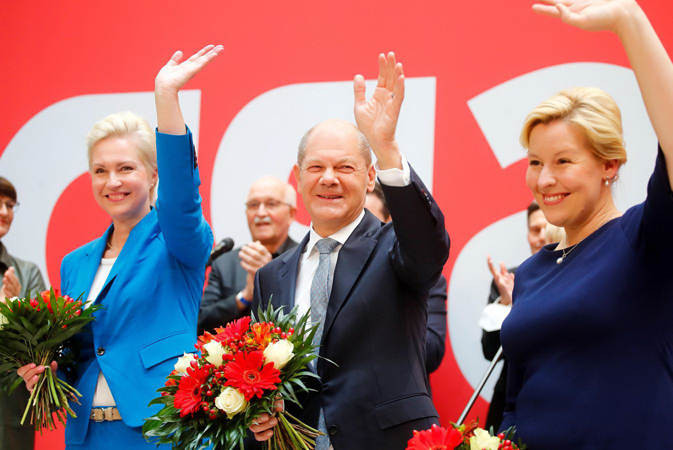 German Social Democrat Olaf Scholz vowed on Monday to strengthen the European Union and keep up the transatlantic partnership in a three-way coalition government he hopes to form by Christmas to take over from Angela Merkel’s conservatives.

Scholz’s Social Democrats (SPD) came first in Sunday’s national election, just ahead of the conservatives, and aim to lead a government for the first time since 2005 in a coalition with the Greens and the liberal Free Democrats (FDP).

Scholz, 63, projected a sense of calm assurance when asked whether the close election result and the prospect of prolonged coalition negotiations sent a message of instability in Germany to its European partners.

“Germany always has coalition governments and it was always stable,” he said in fluent English, standing beside a statue of Willy Brandt, a Cold War-era SPD chancellor awarded the Nobel Peace Prize for fostering dialogue between East and West.

The SPD, Germany’s oldest party, won 25.7% of the vote, up five percentage points from the 2017 federal election, ahead of Merkel’s CDU/CSU conservative bloc on 24.1%, provisional results showed. The Greens came in with 14.8% and the FDP won 11.5%.

The SPD’s recovery marks a tentative revival for centre-left parties in parts of Europe, following the election of Democrat Joe Biden as U.S. president in 2020. Norway’s centre-left opposition party also won an election earlier this month.

Scholz, who served as finance minister in Merkel’s outgoing ‘grand coalition’, said a government led by him would offer the United States continuity in transatlantic relations.

“The transatlantic partnership is of (the) essence for us in Germany… So you can rely on continuity in this question,” he said, adding it was important for democracies to work together in a dangerous world even allowing for occasional “conflicts”.

Scholz said he hoped to agree a coalition before Christmas, “if possible”. However, his conservative rival Armin Laschet, 60, said he could still try to form a government despite leading his CDU/CSU bloc to their worst ever national election result.

Laschet’s own party nevertheless bemoaned the scale of their defeat in the former Communist East, where their fortunes had been waning since Merkel opened the door to more than a million refugees in 2015. Support collapsed further in Sunday’s vote.

“If I think about the east, I am floored by it,” CDU General Secretary Paul Ziemiak said.

The Greens and FDP said late on Sunday they would first talk to each other to seek areas of compromise before starting negotiations with either the SPD or the conservatives.

“I expect that, in the next few days, there will be talks with all parties that are in a position to form a coalition. Then there will be clear exploratory talks,” said Greens co-leader Robert Habeck.

Merkel, who did not seek a fifth term as chancellor, will stay on in a caretaker role during the coalition negotiations that will set the future course of Europe’s largest economy.

INVESTOR RELIEF: German shares rose on Monday, with investors pleased that the pro-business FDP looked likely to join the next government while the far-left Linke failed to win enough votes to be considered as a coalition partner.

“From a market perspective, it should be good news that a left-wing coalition is mathematically impossible,” said Jens-Oliver Niklasch, LBBW economist, adding that other parties had enough in common to find a working compromise.

If Scholz succeeds in forming a coalition, the former mayor of Hamburg would become only the fourth post-World War Two SPD chancellor and the first since Merkel took over from Gerhard Schroeder in 2005.

Merkel has loomed large on the European stage since then – when George W. Bush was U.S. president, Jacques Chirac was French leader and Tony Blair the British prime minister.

But Berlin’s allies in Europe and beyond will probably have to wait months before they can see how the new German government will engage on international issues.

Assuming Scholz can agree a deal with the Greens and the FDP, the Greens could provide the foreign minister, as they did with Joschka Fischer in their previous two-way alliance with the SPD, while the FDP has its eyes on the finance ministry.