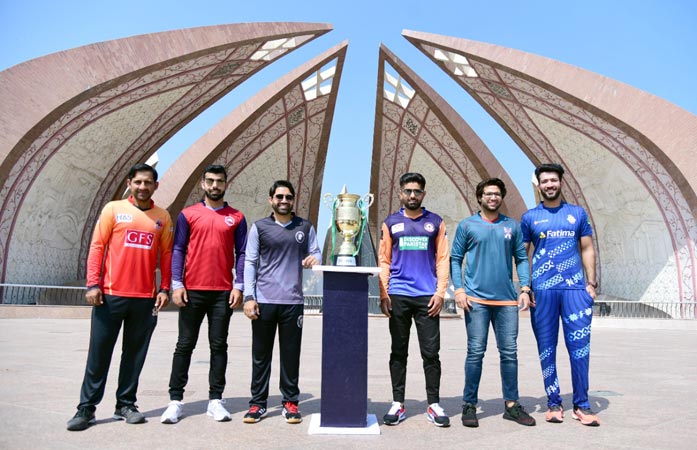 RAWALPINDI: The captains of the six participating teams of the National T20 have urged fans in Rawalpindi and Lahore to rally behind the tournament which showcases the best of Pakistan’s T20 talent. All 18 Pakistan players (including the three travelling reserves) part of the ICC Men’s T20 World Cup touring party will be seen in action in the tournament that runs from September 23 to October 13. The first leg will run until 3 October at Rawalpindi’s Pindi Cricket Stadium, before the action moves to Gaddafi Stadium, Pakistan’s home of cricket, where the second leg will be staged from October 6-13. Nearly Rs.9million prize money will be up for grabs in the National T20. Rs.5million will be awarded to the winners while the runners-up will receive Rs.2.5million. Rs.400,000 will be shared equally between the tournament’s top performers which include player of the tournament, best batsman of the tournament, best bowler of the tournament and best wicketkeeper of the tournament. The best performer of every match will get Rs.25,000 as the man-of-the-match award while the top performer of the tournament’s finale will be rewarded Rs.35,000. Meanwhile, all six squads are packed with quality T20 performers and form a great blend of youth and experience.

Balochistan will be led by Pakistan ODI batter Imam-ul-Haq, the southpaw will rely on the experience of batters like Haris Sohail, Akbar-ur-Rehman and the flair of Pakistan U19 opener Abdul Wahid Bangalzai. Balochistan also possess a quality bowling attack with the likes of Junaid Khan, Umaid Asif, Khurram Shehzad, Amad Butt, Akif Javed, Yasir Shah and Kashif Bhatti at Imam’s disposal. Pakistan’s all-format captain Babar Azam leads a star-studded Home City Central Punjab outfit that includes seasoned T20 campaigners like Ahmed Shehzad, Hussain Talat, Kamran Akmal, Mohammad Hafeez and Shoaib Malik who will form the batting fulcrum for the side along with Babar. Babar who will be captaining Pakistan in the ICC Men’s T20 World Cup, also has an experienced and incredibly potent bowling attack under him in the shape of Ehsan Adil, Hasan Ali, Usman Qadir, Wahab Riaz and Waqas Maqsood. Pakistan U19 captain Qasim Akram and top-order batter Abdullah Shafique are the two youngsters who would be hoping to make a big impression in the tournament. All-rounder Faheem Ashraf will lend balance to the side with his hard-hitting batting and seam bowling.

The defending champions Khyber Pakhtunkhwa are led by Pakistan all-format wicketkeeper-batsman Mohammad Rizwan. Rizwan has a quality batting line-up in his ranks which will be led by him and Fakhar Zaman. Iftikhar Ahmed, Mussadiq Ahmed and Sahibzada Farhan provide further batting depth. Budding wicketkeeper-batsman Mohammad Haris and all-rounder Mohammad Wasim will be the youngsters to watch out for in the Khyber Pakhtunkhwa line-up. Pakistan’s pace bowling spearhead Shaheen Shah Afridi will lead the KP attack, Arshad Iqbal, Imran Khan Snr, Asif Afridi and Mohammad Imran Khan are the other bowlers Rizwan would be pinning his hopes on.

The Shadab Khan-led Northern is another potent squad in the tournament. The winners of the first edition of the revamped National T20 (2019) have a great mix of dynamic batters and bowlers who have the potential of totally dominating their opponents on their day. Shadab will have the services of big-hitting batters like Haider Ali, Asif Ali, Zeeshan Malik and Sohail Akhtar. All-rounders like the seasoned Imad Wasim and Mohammad Nawaz along with Shadab himself lend great balance to the team. Northern also possess a fiery pace attack with Haris Rauf, Musa Khan, Salman Irshad and Zaman Khan capable of bowling over 140 kph consistently with the wily left-armer Sohail Tanvir set to spearhead the attack with his wealth of T20 experience. Imad, Nawaz and Shadab provide Northern, quality spin bowling options.

Sarfaraz Ahmed-led GFS Sindh have a solid batting line-up that can post big totals. The top-order of Khurram Manzoor, Sharjeel Khan, Ahsan Ali and Shan Masood (transferred from Southern Punjab) will provide the firepower with Danish Aziz likely to get the finisher’s task, a job he repeatedly performed successfully in the last edition of the tournament. Sindh also possess a potent bowling attack which will be spearheaded by pacers Shahnawaz Dahani and Mohammad Hasnain with the left-armer Rumman Raees making a comeback after regaining full fitness, Rumman last appeared in the HBL Pakistan Super League 2020 for Islamabad United more than 18 months ago. Spinners Abrar Ahmed and Zahid Mahmood provide further variation and depth to the Sindh squad.

ATF Southern Punjab are led by Sohaib Maqsood, the hard-hitting top-order batter had an excellent run in the event last year and was one of the reasons of his side’s entry into the final. Sohaib who is part of the Pakistan ICC Men’s T20 World Cup squad has other attacking batting options in his squad, the left-hander Zeeshan Ashraf and the right-hander Azam Khan (transferred from Sindh) can also keep wickets besides hitting it big. The left-hander Khushdil Shah will be tasked to provide big runs at a high strike rate in the middle-order. All-rounders Aamer Yamin, Imran Randhawa and Hassan Khan (transferred from Sindh) provide depth to the squad. Sohaib also has a potent bowling attack at his disposal with Naseem Shah (transferred from Central Punjab), Mohammad Ilyas and Dilbar Hussain spearheading the attack. Young spinner Umer Khan and Faisal Akram provide exciting left-arm-spin orthodox and unorthodox options.