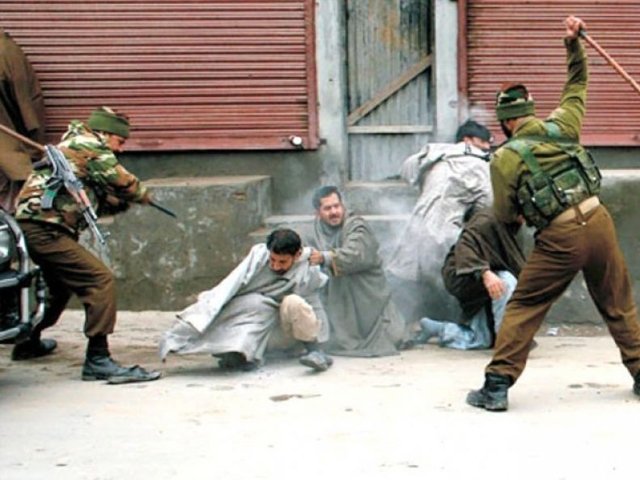 ISLAMABAD: The world is observing International Day of Peace, on Tuesday, but the peace is something quite unknown to the peace-loving people in Indian illegally occupied Jammu and Kashmir (IIOJK) who are facing the worst state terrorism by India in the territory for the past 74 years.

A report released by Kashmir Media Service in connection with International Day of Peace, on September 21 cited the victims of the Machil and Shopian fake encounters, killing of top resistance leaders including Muhammad Ashraf Sehrai and Syed Ali Gilani in detention and said that such incidents mock the global celebration of the peace day.

The report maintained that 21 September is dedicated to the global peace, but the Kashmiris continue to suffer under brutal Indian occupation while the same continues to elude South Asia for the past more than seven decades due to the free license enjoyed by India to carry out massacre of the Kashmiri people with impunity.

Indian troops, the report adds, are using brutal force including torture against the Kashmiris on daily basis in IIOJK. “Ordinary Kashmiris are forced to live under iron siege while Indian forces’ actions in are no less than a holocaust in the occupied territory.”

The report deplores the silence of the world community over imposition of continued military siege in IIOJK since abrogation of Article 370 and 35 A and turning of the IIOJK into a big concentration camp by the BJP/RSS backed Modi government and stepped up its state terrorism in IIOJK . Over three thousand Kashmiris including resistance leaders, men and women and youth are facing illegal detentions in interrogation centers, jails in IIOJK and India.

The report called for bringing Narendra Modi and his henchmen to book and prosecution of Indian troops for committing war crimes against innocent Kashmiris. On the International Day of Peace, today, the report brought the attention of the world community towards the sufferings of caged and suppressed Kashmiris who are waiting for global community’s help.

While reminding the world that India continues to remain a stumbling block in the way of peaceful resolution of Kashmir dispute, the report stressed that Narendra Modi led fascist Indian government must be held accountable for its crimes in Kashmir, which has become the biggest open air prison on planet earth, today.