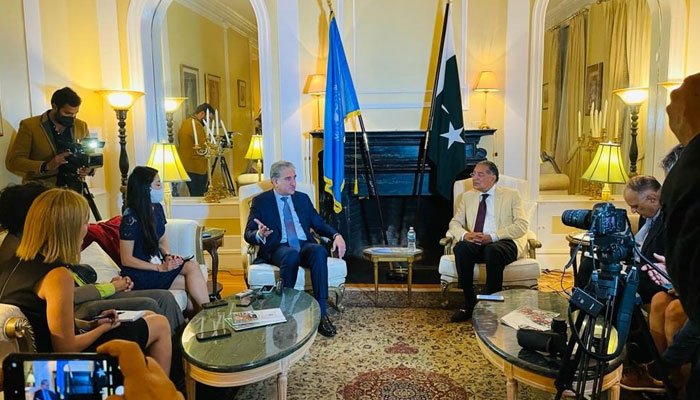 NEW YORK: Foreign Minister Shah Mehmood Qureshi urged the international community to support Afghans at a critical point through different steps, including unfreezing their assets, as according to him, there is still hope for stability in Afghanistan.

“Afghans have faced war in the last four decades. Therefore, the international community should not leave Afghans alone now”. The foreign minister said this while interacting with the United Nations’s press representatives.

Qureshi said Pakistan has been hosting more than three million Afghan refugees for the last four decades. Even with the limited resources and without financial support from the international community.

Pakistan’s economy can no longer bear the burden of refugees, he added.

Qureshi said his country gave all-out support for the evacuation of citizens. And also to the diplomatic staff and media representatives of different countries from Afghanistan.

International community should take a step to support Afghanistan

FM urged to address the growing humanitarian crisis in Afghanistan. Qureshi said the international community must move forward and take steps to ensure the support of Afghans.

The initial statements made by Taliban leaders are encouraging, said Shah Mehmood Qureshi. Adding that respecting international opinion and keeping its promises is in the best interest of the Taliban. Because the Taliban want to seek recognition by the world.

Nobody is rushing to recognise Taliban

“I don’t think anybody is in a rush to recognise them at this stage. The Taliban should keep an eye on that as they need to be sensitive and more receptive to international opinion.”

“In my opinion, unfreezing the frozen assets of Afghanistan for [the] Afghans may serve as a major step for confidence-building that could also incentivise positive behaviour,” he said.

“On one hand, you’re raising fresh funds to avert a crisis and on the other hand money that is theirs — belongs to them — they cannot use. I think freezing the assets is not helping the situation. I would strongly urge the powers that be that they should revisit that policy and think of an unfreeze.”

The United States froze $9.5 billion in Afghan central bank assets. Whereas, international lenders have stayed clear of Afghanistan, wary of providing money that could be used by the Taliban.

Qureshi said several positive aspects also emerged during the current transition in Afghanistan. The absence of bloodshed and civil war during this recent change is a positive aspect, he said. He added that the statements made by the Taliban regarding the end of the war, amnesty, respect for basic human rights and protection of women’s rights are encouraging.

The foreign minister also highlighted the Imran Khan-led government’s good intentions towards India. He said Prime Minister Imran Khan took notice. He invited India to take one step towards peace which Pakistan will reciprocate with its two steps.

However, instead of accepting the offer, India took unilateral and unconstitutional steps in Occupied Jammu and Kashmir. It further complicated the situation, the federal minister said.

“We want peace. Even today, India has an option. If it wants peace in the region, it should stop the ongoing atrocities on Kashmiris. And reverse all unconstitutional measures of August 5,” he said. He said voices are being heard today from within India against its Hindutva policies.

Pakistan seeks partnership in peace efforts in the region, he said.