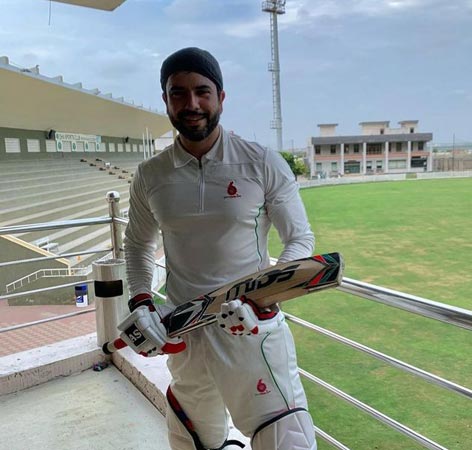 Singer and actor Junaid Khan has proved himself as a good singer and an actor and now his recent Instagram post shows that he is a good cricketer as well.

The singer, sharing a picture of him wearing a full cricket gadget, said that he had a “Man of the Match” moment.

Junaid wrote that he scored 24 runs from six deliveries in which he hit three boundaries and a six in a cricket match.

He gave an impressive performance with the ball as well. He bowled three overs and took three wickets and conceded just 13 overs. His fans praised his performance in the game.

Junaid started his singing career as the lead vocalist of the rock band named Call. Their debut album Jilawatan was released back in 2005. Their second album titled Dhoom saw its release in 2011.

He gave an impressive performance with the ball as well. He bowled three overs and took three wickets and conceded just 13 overs

The celebrity has proved his mettle in the drama industry as well.

He received acclaim due to his performance in Hania, Mumkin, Kasak and Berukhi and Sun Yaara.

Earlier, Junaid had revealed that he was offered a role in the Bollywood movie Aashiqui 2, but he rejected the offer.

“I was asked about it, definitely. At that point, two to three actors from Pakistan were also asked,” he said in the interview with Shaista Lodhi

The actor had claimed that its director Mahesh Bhatt was looking for a new star from Pakistan for musical-romantic film.

He mentioned that an online competition was held for discovering a new face from Pakistan who is not known in India but has worked as an actor and was familiar with music both.