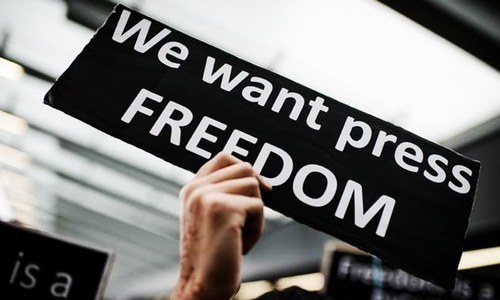 ISLAMABAD: A Joint Action Committee (JAC) of various media bodies on Wednesday agreed to form a committee with the government to resolve the Pakistan Media Development Authority issue peacefully.

“A meeting was held among the Federal Information Minister Fawad Chaudhry, Minister of State Farrukh Habib and representatives of PBA, APNS, CPNE, PFUJ and AEMEND,” reads a press release from the JAC.

“Issues relating to media regulation and proposed PMDA were discussed. The Joint Action Committee expressed its reservations on the proposed PMDA and termed it as unacceptable,” it added.

“It was a mutual agreement to form a committee to address the issue amicably. The committee will address the issue of fake news particularly on social media, the rights of the media workers and ways to further improve laws and regulatory framework,” reads the press release. 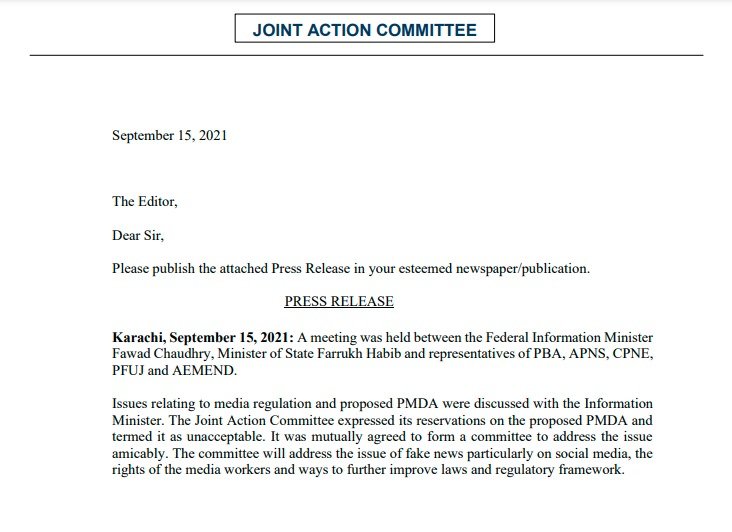 A meeting was held regarding PMDA. Senator Faisal Javed chaired the meeting of SSC at the Parliament House.

Fawad Chaudhry and Farrukh Habib both briefed members of the committee on the PMDA’s concept.

The committee chairman Senator Faisal Javed of PTI highlighted that Prime Minister Imran Khan would never put curbs of any kind on the freedom of speech and press.

“Prime Minister Imran Khan completely believes in freedom of expression. He will never put curbs of any kind on the freedom of speech and press,” he emphasised.

We are committed to maintain a free media. It will evolve its own rules to ensure responsible journalism, he added citing PTI’s manifesto.

He welcomed all the stakeholders (PBA, CPNE, PFUJ, PRA, AEMEND) and representatives of journalist bodies. Along with, other national media groups, who expressed their reservations and point of view on the proposed PMDA.

In case of no consensus, bill won’t be introduced

All stakeholders and the legislative bodies are being consulted for the first time in Pakistan’s history. The bill will not be introduced in case of a lack of consensus on government ideas regarding the PMDA, said fawad.

He said that it has become a convention by the Opposition to oppose every bill proposed by the government, however, this is an important bill and we should work above party lines to understand the spirit and objective behind the bill. A fake ordinance was issued to misinterpret and create chaos in the country against the media freedom.

The representatives of the PBA criticised the government, saying that it did not like the media. Other stakeholders agreed on the need to strengthen existing laws rather than passing new ones.

The existing bodies like PCP need to be strengthened. PCP may be converted into the media council of Pakistan because there is no forum for electronic media. This is how it will deal with issues related to media in general, the committee chairman said.