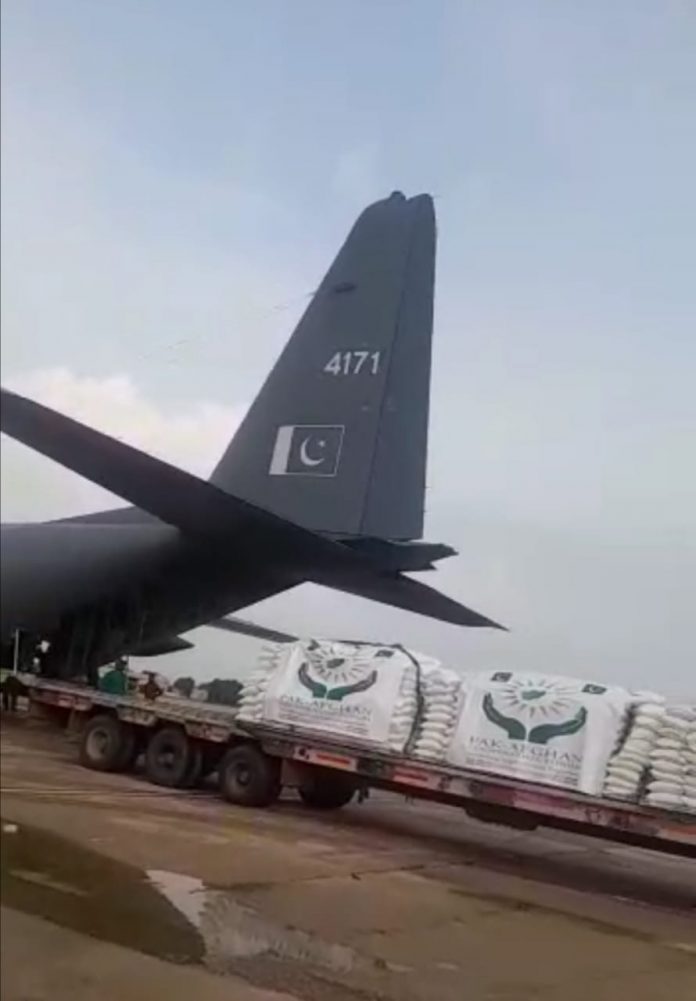 KABUL:  A C-130 aircraft of Pakistan Air Force landed at Afghanistan’s capital Kabul on Thursday, carrying relief goods for the people of the country.

Pakistan’s ambassador to Afghanistan Mansoor Ahmad Khan received the humanitarian supplies at the Hamid Karzai International Airport and handed them over to the Afghan officials. Talking to the media, the ambassador said the relief goods included around 10 tons of flour, 1.5 tons of ghee, and a huge quantity of emergency medicine. “With first such flight, this is just a beginning of the humanitarian assistance for the people of Afghanistan, as more would be carried out in coming days,” he said.

Pakistan’s ambassador to Afghanistan Mansoor Ahmad Khan speaks to the media after handing over relief goods to the Afghan officials, at Hamid Karzai International Airport on Thursday. Khan said two more C-130 flights carrying relief goods would be arranged for Kandahar and Khost on Friday and Saturday, respectively. He said the activity would continue for weeks and months and Pakistan’s public and private sectors and the charity organizations would be sending humanitarian supplies to Afghanistan in a systematic way.

Beside air routes, he said, the goods would be transported through Pakistan’s land routes including Torkham and Chaman as well. The Foreign Office in a statement said, “​The Government of Pakistan will continue to do its best to help Afghan brethren during the prevalent challenging environment.”.

Pakistan has consistently been urging the international community to help avert the economic collapse and humanitarian crisis in Afghanistan after the fall of the Ashraf Ghani government. The landlocked country has been cut off from the rest of the world for almost a month after the collapse of the previous government.