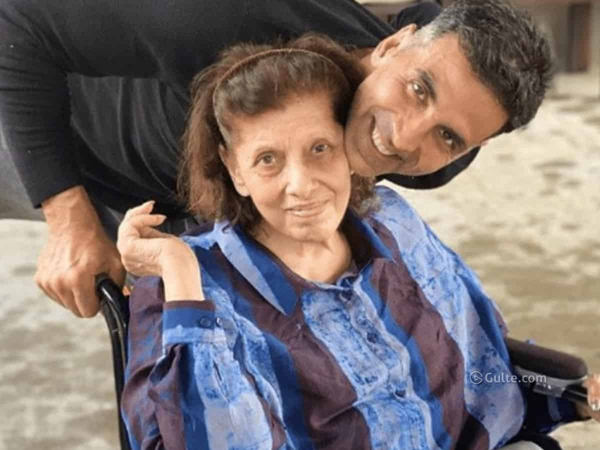 The demise of Akshay Kumar’s mother, Aruna Bhatia left the actor heartbroken. Bellbottom star broke the news on social media and several celebrities including an ocean of fan following extended condolences. Aruna Bhatia breathed her last on Wednesday. The exact cause of her death is still unknown, although she was admitted to the Intensive Care Unit of Hiranandani Hospital in Mumbai a few days back. Her last rites were performed today in the afternoon at Pawan Hans crematorium in suburban Mumbai. Many Bollywood big shots including Rohit Shetty, Riteish Deshmukh, Sajid Khan, Bhushan Kumar and Ramesh Taurani among many others paid their last respects. Inconsolable Akshay with his wife Twinkle Khanna, her cousin Karan Kapadia were seen at the funeral. Several celebrities such as Ajay Devgn, Salman Khan, Nimrat Kaur, Dia Mirza, Vindu Dara Singh among others extended condolences and mourned the demise of Akshay’s mother. Recently, the Bollywood star rushed back to Mumbai from London, as his mother’s condition deteriorated.