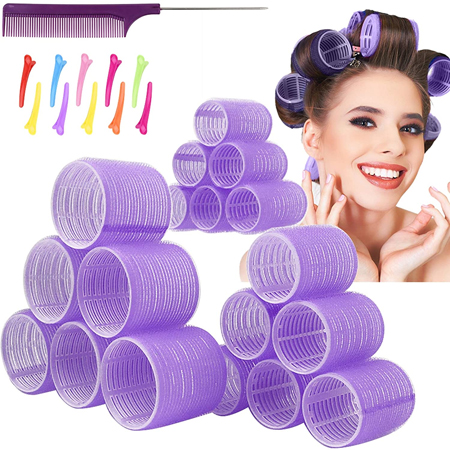 First, they showed up on social media, where this spring a new generation began discovering them in a TikTok hair flip challenge to recreate Farrah Fawcett’s bouncy curls.

Then they became the secret weapon for celebrity hairstylists as big volume returned as a thing after years of lived-in looks that erred more on the side of shaggy than bombshell. Take Dove Cameron, Michelle Obama, Laura Dern, Jennifer Lopez and SZA, for example.

Rollers even showed up at the couture debut of Pyer Moss in July, albeit in a more literal fashion, worn as a cape that took two weeks to create.

It seems rollers are officially everywhere now, and stylists are gravitating toward them in a major way.

“I recently did a workshop on the return of the ’90s supermodel,” said Michael Angelo, owner of Wonderland Beauty Parlour in New York. “It was really fun showing the next generation how we did it back in the old days. We used hot rollers, Velcro rollers, bendy boys – you name it.”

After so much time at home, it’s not hugely surprising that many women are ready for a bit of unapologetic glamour. “A lot of folks are looking to the supermodel heyday of the ’90s for inspiration,” Angelo said. “I’m thinking of that iconic Cindy Crawford swoop, which is all about rollers – and which she still rocks, by the way!”

For some, the appeal of rollers is the nostalgia surrounding them; for others, it’s the aesthetic inspiration of decades past. Like Angelo, with his ’90s workshop, they’re looking to rollers to get hair that hints at the past but is modern and fresh. Seemingly, an entirely new generation is flocking to them, many for the first time.

“I would say that for the past year, and particularly the past six months, I’ve been over messy waves, and I became really obsessed with perfect, bouncy ’90s blowouts,” said Bella Cacciatore, 25, a beauty writer at Glamour magazine. “After a decade of super-lived-in hair being what’s in, it feels so cool and fresh. It also makes me feel pretty after a year of topknots. I tried a blowout with a round brush and couldn’t get it right, so I decided to try rollers after seeing them on TikTok.”

Likewise, Caroline Jones, 28, a kindergarten teacher, discovered rollers on Instagram. “About a year ago, an account I follow on Instagram, @Sophielrae, posted about using hot rollers, and it took me right back,” Jones said. “I ordered a set right away and have been using them regularly since.”

“Rollers are nostalgic for me because they are the first hair or makeup tool I ever used in junior high,” she said. “I had thick hair prone to frizz, and they made me feel polished at an age that can feel pretty awkward. I loved them because they left my hair ‘big’ but smoothed my frizz.”

Chloe Barcelou, 31, a stylist, loves hot rollers for their convenience; she often puts them in before doing her makeup. She has coarse hair and believes the rollers help smooth it out.

“Growing up, rollers were huge in my family,” Barcelou said. “My grandmother used them almost every day. When I think of them, I think of the female heritage of my family.”

If 2021 is indeed the year that really big hair comes back, rollers just happen to be the best way to get that look.

“Whenever I am looking for volume in a style, I always use rollers, said Ryan Richman, the hairstylist behind the 20-year-old TikTok star Addison Rae’s signature glam blowout.

“Sometimes all you need is a few in the right place,” Richman said. He creates a voluminous look by prepping hair with a setting spray, putting the hair in hot rollers and then spritzing with hair spray once the hair has cooled.

When it comes to rollers, placement is everything.

“Hair rollers can be a bit tricky at first,” Richman said. “Deciding how to set your hair to achieve the look you want and where you want to add volume takes some time to learn, but overall is pretty logical. For example, to create a side part with a lot of volume in the bang area, set your part and use Velcro rollers in one-inch sections on the heavy side of the part. If you over-direct the section – meaning that after you lift the hair straight off your scalp, you direct it even farther – you will achieve maximum volume.”

A common technique Richman uses is putting three or four medium to large rollers above the forehead, rolling the hair back, then continuing with more rollers on the sides, with the hair rolled in a downward direction. A simple rule of thumb is that a larger roller size gives you loose volume while smaller ones yield tight, retro curls.

Another reason a new generation is choosing rollers over traditional curling irons is that they’re more healthy for hair, whether you choose hot rollers or Velcro options.

“Hot rollers are much more protective of the hair than hot irons,” said hairstylist Frédéric Fekkai. “They give bounce, volume and curls and waves without pressing the hair, and are much less damaging. The finished look is healthier.”

Fekkai has also seen more demand from a new clientele. “The younger generation is interested in rollers to style their hair because they can tousle it to look modern and sophisticated,” he said. “It goes very well with curtain bangs or just long hair.”

Izquierdo positions rollers at the top of the head for face-framing volume. Once the rollers are out, he messes up the hair with his fingers and adds hair oil to the ends for a polished look Angelo had a final thought: “Remember, kids, giant hair means giant entrance.”