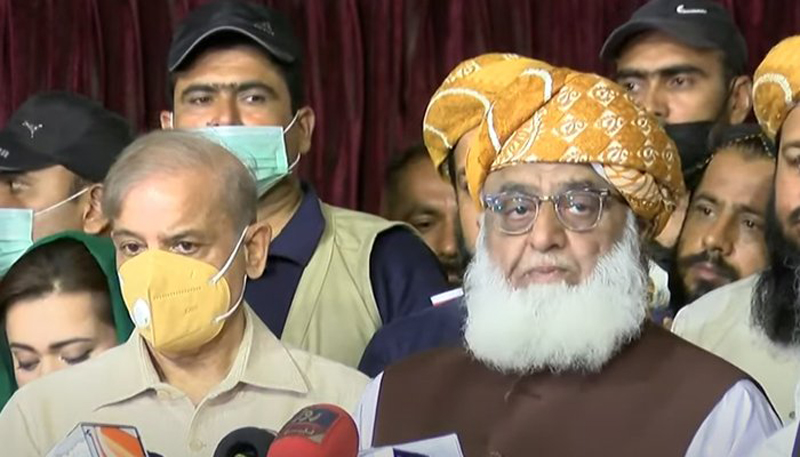 Pakistan Democratic Movement (PDM) leader Maulana Fazlur Rehman on Saturday maintained that that the alliance has only one target now, which is to rid the country of the ruling government.

Fazl, speaking at a press conference in Karachi alongside Leader of the Opposition in the National Assembly Shahbaz Sharif and other political party leaders, also announced an expansion of protests by the movement against PTI government across the country. The PDM chief said women would also come to the anti-government protests, and they would be treated with the utmost respect – in reference to the recent harassment incidents with women in Lahore.

To a question, Fazl said the PPP ‘stabbed the PDM in the back’, and gave a strong indication that the alliance had moved on from seeking any future reunions with the party. He also told reporters to not discuss PPP as it was ‘a thing of the past’.

A meeting of the leaders of various Opposition political parties in the PDM was held prior to the media briefing, ahead of the alliance’s rally at the Quaid’s mausoleum on Sunday. “PDM will also raise the issues in Sindh,” he said, hitting out once more at the PPP, which is the ruling provincial party.

“As far as the PPP is concerned, they tried with all seriousness to stab PDM in its back but we are not going on the offensive against them,” he further said. “We don’t want to fight two wars,” the PDM chief said, adding that the PPP issue had become a thing of the past and called on reporters to refrain from bringing up the matter.

The PDM chief said the opposition alliance rejects the proposed Pakistan Media Development Authority (PMDA). “We do not accept this black law.” Fazl said PDM stands in solidarity with the journalist community and announced a protest outside the parliament, as PMDA was an ‘unannounced’, ‘dictatorial’ law.

Fazl said leaders of all the political parties associated with the anti-government movement had attended the meeting, and they expressed grief over the ongoing ‘instability’ in the country. He further said that the PDM also rejected the government’s electoral reforms, which he claimed that the “entire world” had disapproved of, but the incumbent government was persistent in introducing. “Electronic voting is a plan to steal elections,” he said.

He said that the PDM will “lay down a web of rallies” in the country and also launch a road caravan so that citizens can protest for their rights. He said that the PDM would meet in the first week of September to decide the order of the rallies and the schedule for the road caravan. “The PDM has also decided that it will issue a white paper on the government’s three-year performance. Work has begun [in this regard] and we will lay bare their performance in front of the people,” he said.