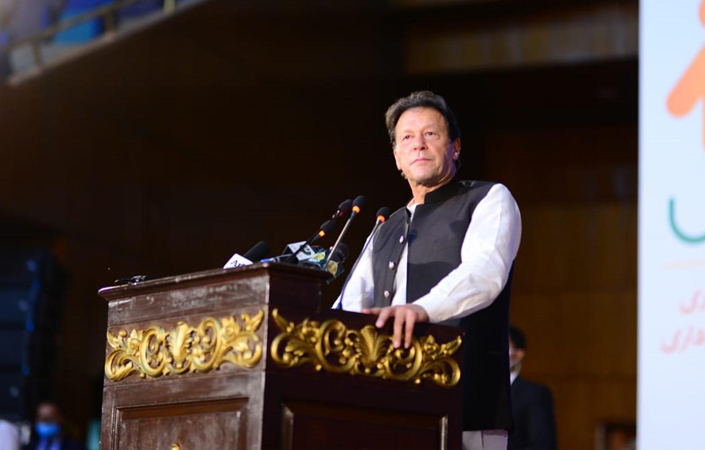 Prime Minister Imran Khan on Thursday said that with all major economic indicators showing upward trend, the present government, despite various challenges including the Covid-19 pandemic, has put the country’s economy on right path in the last three years.

The prime minister was addressing a ceremony at the Convention Center to launch the three-year performance report of the present government, led by Pakistan Tehrik-e-Insaf (PTI). He said that when the present government took reign of affairs in 2018, the country with the highest-ever $20 billion of current account deficit, was close to default and rupee was depreciating. “If the friendly countries including Saudi Arabia, UAE and China did not support Pakistan, rupee in the country would have further depreciated,” he added.

He said that the receipt of an additional income of Rs 1100 billion by the farmers in agriculture sector and the historic sales of motorbikes, cars and tractors during the previous fiscal also, depicted prosperity in rural areas.

The prime minister said that the government’s successful strategy to deal with the COVID-19 pandemic also led to saving the economy and poor masses, adding the international institutions including the World Economic Forum and the World Health Organization appreciated Pakistan’s strategy on COVID-19.

He said that despite the criticism by opposition parties, the government did not go for complete lock-down of the economy, which, if opted, would have caused increase in poverty and hunger like in India.

The prime minister appreciated the National Command and Operations Center (NCOC) for its timely and effective decisions to tackle the COVID-19 pandemic.

He said his message to the youth was to follow the sublime path, set by Allah Almighty and Prophet Muhammad (PBUH). “We have to learn from the life and teachings of the Holy Prophet (PBUH).”

He said sports did inspire him to never give up and keep on striving and cited the example of Quaid-e-Azam who strove for a great cause and succeeded in creating Pakistan. He said due to economic mismanagement of the past, the people had to endure price hike and inflation and the government had to take loans from International Monetary Fund (IMF) on stringent conditionalities.

He thanked Pakistan Army and Pakistan Air Force for countering aggression of India after the Pulwama incident and said there was no reason to have critical views about national institutions. He said the PTI government was fully committed to its three guiding principles of humanity, rule of law and self-respect.

He said no country could progress if there was no of rule of law. He recalled that Asif Ali Zardari landed in jail because of his corrupt practices whenever the PPP government was ousted in the past. He said the countries got weakened when the ministers indulged in corruption and cited the Holy Prophet’s system of justice of the Riyasat-e-Madinah.

He referred to a UN report which pointed out that $1000 billion was being transferred from developing countries to the developed ones every year which resulted in a widening gap between the rich and the poor. According to another report, $10 billion was sent from Pakistan every year to bank accounts abroad to purchase properties there, he added.

He said the anti-corruption department of Punjab had recovered only Rs 2.5 billion during the regime of Pakistan Muslim League-Nawaz while in the tenure of present government, its recoveries stood at Rs 450 billion. Similarly, the recoveries of National Accountability Bureau (NAB) rose to Rs 519 billion in the last three years from Rs 290 billion in 18 years, he added.

The World Bank declared Pakistan’s Ehsaas programme as the third best in the world, he said and added the programme played a vital role in taking care of the poor during the coronavirus pandemic. Additional funds were allocated for scholarships of girls as compared to the funds for boys, the PM said and added the government empowered women with renewed focus on their education. He said the government took steps to fully facilitate women in getting succession certificates and share of inheritance.

Under the Kamyab Naujwan Programme, he said, youth of four million poor families would be given interest-free loans, health insurance cards, and skills training. Easy interest-free loans were given so that low income groups could build affordable houses, he said, adding 30 percent of the country’s population consisted of the youth.

Imran Khan said farmers would be given subsidy through Kisaan Card so that they could buy fertilizers, pesticides and other agriculture inputs. Ten reservoirs including Mohmand and Dassu dams would be built to meet water requirements, he added. He said uniform curriculum would be introduced and Seerat-e-Nabi courses would be taught in classes from eight to ten.

Expressing concern over the rising crimes against women and children, he underlined the need for character building of the youth with imbibing moral values.

He told the audience about Rs1300 billion special packages for merged tribal areas of Khyber Pakhtunkhwa, and districts of Balochistan, Sindh and Gilgit-Baltistan to eliminate backwardness and deprivation of local people.

The prime minister said the past leaderships did compromise dignity of the country by begging and getting loans from other states. Pakistan could make rapid progress by developing its agriculture, industry, mining, tourism and banking sectors, he opined. He said today business confidence had markedly improved in the country while foreign remittances were on the rise.

He recalled Pakistan sided with the United States in the war on terror but latter carried out 480 drone attacks on its soil. Over 70,000 Pakistanis lost their lives in the war fought on behalf of another country, he added.

The prime minister said the Afghan defence forces declined to fight for their corrupt leaders. He called upon the world to support the Taliban as they wanted an inclusive government in Afghanistan, and declared general amnesty for all, besides assurance that no one would be allowed to carry out terrorist attacks from their soil against other countries. He said the world community should help the Taliban to maintain peace in Afghanistan. 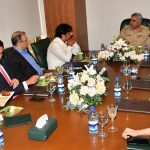