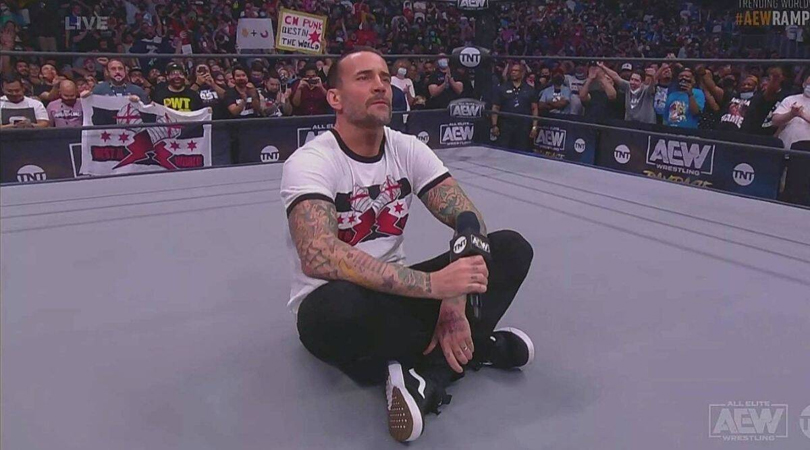 CM Punk is back in pro wrestling. But it isn’t with WWE. Seven years after leaving WWE, Punk finally made his highly-anticipated return. He debuted on Friday with AEW, bringing a rare presence to the company that is an equal blend of charisma and toughness.

Broadcast live on TNT, AEW Rampage opened with Living Colour’s “The Cult of Personality” blasting throughout the United Centre in Chicago, Illinois, a song that has become synonymous with Punk. The response was electric, and Punk then cut a passionate promo in the ring. It felt as though Punk were speaking to old friends, reminiscing about his departure from Ring of Honour in 2005-which he described as the day he left professional wrestling-and officially declared this moment in AEW his return.

“I get excited about the prospect of me working with Pillman, Hobbs, Ricky Starks, Jungle Boy, Darby Allin, Jon Moxley-I’ve never worked a Jon Moxley before,” said Punk, speaking during a post-show press conference. “Literally, it’s everybody. I’ve never done anything with the Young Bucks. I’ve never stepped in the ring with Kenny Omega.

“I think there are so many dream matches, is what people will call them, or dream situations, and who knows who else is coming… I’m excited to be here. I said it out there in the promo-I’m here for the fans, I’m here for me. I’m not a liar, I’m not going to lie-if you tell me this is going to be fun again, and I can go out there and have the time of my life, that’s the juice for me.”

Broadcast live on TNT, AEW Rampage opened with Living Colour’s ‘The Cult of Personality’ blasting throughout the United Centre in Chicago, Illinois, a song that has become synonymous with Punk

During Rampage, Punk called out Darby Allin, who was watching beside Sting from the rafters, for a match on September 5 at the All Out pay per view back in Chicago.

“I want to backtrack to the first thing I did,” said Punk. “I hadn’t been in a ring for seven years, and the first thing I did was mention Britt Baker. This needs to be paid attention to. This is how you get talent over, this is how you help people. I think Britt’s great. I think everybody here’s great. If I could have name-dropped everyone here, I would have, but that popped into my head.

“The Darby thing was Tony Khan’s idea. I did a Twitter Q&A a year, a year-and-a-half ago, and, ‘Hey Punk, who do you see that you think you’d like to work with?’ It was all young guys that I saw potential in. Darby was one of them.”

Then, in a fashion perfectly fitting Punk, he exited his promo on Rampage by expressing his gratitude to the crowd, offering free ice cream bars as people left the venue at the end of the night.

“These ice cream bars, to me, represent an idea, an idea that was gift-wrapped to people that didn’t bother to take the time to try to understand their audience,” said Punk. “This is the easiest home run I’ve ever hit, and this is a legit thank-you. Jon Lester came to the Chicago Cubs and won us a World Series. When he got traded away, he opened up a tab at a bunch of bars as a way to say thank you to the fans. This is my way to say thank you to the fans.”

Punk-who is 42-year-old Phil Brooks-remains a unique entity in pro wrestling. He was an indie wrestling icon before elevating himself to a whole new tier of stardom in WWE. His promos are some of the most compelling in the history of the industry, with his “Pipe Bomb” promo from June 2011 standing the test time as a signature moment of Monday Night Raw.

Punk left WWE under especially acrimonious terms in 2014, which he attributed to legitimate concerns over his health. His termination was particularly galling, as he was fired in 2014 on his wedding day. Vince McMahon later publicly apologized for the poor timing during an interview with Steve Austin on the WWE Network, but the damage between the two parties was irrevocable. His relationship with WWE was further derailed after a tension-filled lawsuit in 2018, where a jury ruled in his favour in a defamation lawsuit filed by WWE doctor Chris Amann.

That lawsuit centered around Punk’s criticism of his WWE medical treatment, which he spoke of during a 2014 podcast with Colt Cabana. To say that the Punk/Cabana podcast went viral would be an understatement, as it was an interview that reverberated throughout the entire industry. It made sense that Punk did the interview with Cabana considering their long-standing friendship. That took a turn, however, in 2018, as Cabana sued Punk for legal fees stemming from the defamation suit. This was settled out of court, and has appeared to put an end to any type of positive rapport between Punk and Cabana. Interestingly, Cabana is also part of the AEW roster.

In his time away from pro wrestling, Punk competed in mixed martial arts, fighting for the UFC on two different occasions. He also dabbled in writing and acting, all while an overwhelming amount of wrestling fans impatiently chanted his name and demanded his return. He briefly returned to WWE programming in November of 2019 as part of the WWE Backstage show, where he was contracted through Fox and not WWE. Punk now has the potential to be a massive star for AEW, allowing the company to reach an even wider audience as it seeks to assert itself in a terrain long controlled by WWE.

Punk’s AEW debut took place a night before SummerSlam, a signature event for WWE. While parties from both sides often contend that WWE and AEW are not in direct competition, there is no mistaking that WWE officials are well aware that the Punk appearance takes headlines away from their weekend, while AEW is ecstatic to be the top overall story in a weekend traditionally dominated by WWE.

“Timing is everything,” said Punk. “It felt right. When I was sick and tired and hurt and I realized that these people wouldn’t care if I died today-there would be another show tomorrow. I knew I had to remove myself from the situation. I didn’t know how long it was going to take for me to heal. Then this came along, and credit to everyone in AEW. It reminded me of places I used to work that I loved, where it was more about the spirit of the thing. This, instead of feeling like a house, it felt like a home.”

The future of wrestling has changed its direction. AEW’s newest acquisition helps place them on equal footing with WWE in terms of storylines, and, perhaps soon, ratings, as CM Punk is now All Elite.