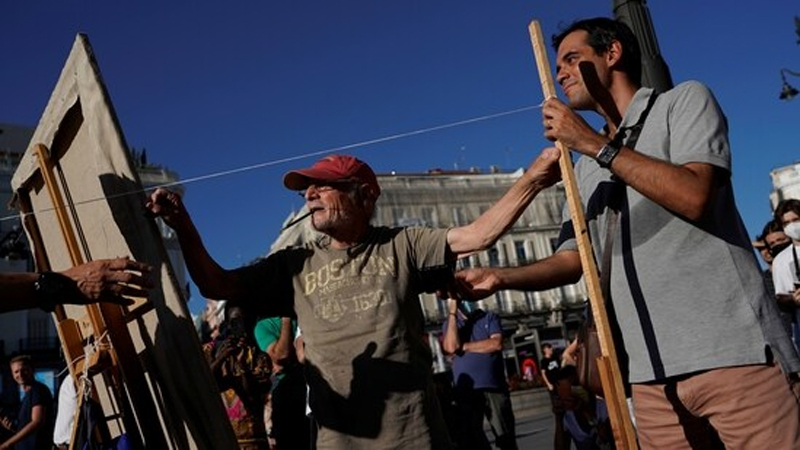 It’s not often you get the chance to see a master at work, but Madrid residents have recently been able to watch one of Spain’s greatest living artists set up his studio under the blazing sun on the famous Puerta del Sol square.

Every day from 6:30pm to 9pm since the start of July, painter and sculptor Antonio Lopez, 85, has positioned his large easel and canvas and begun mixing his paints, as a crowd of shoppers, dog walkers and art lovers assembles around him.

Seeing such a famous face installed among the tourist shops and lottery stalls of Puerta del Sol has excited many locals.

“It’s a once-in-a-lifetime moment because Antonio Lopez is a living legend of Spanish art,” said art teacher Javier Mateo, 33, who was inspired by Lopez to study art himself.

‘It’s a once-in-a-lifetime moment because Antonio Lopez is a living legend of Spanish art,’ said art teacher Javier Mateo, 33, who was inspired by Lopez to study art himself

Lopez, who has enjoyed a long career in Spain and features in the permanent collections of museums around the world, is renowned for his lifelike depictions of everyday subjects, from city scenes to portraits.

He famously does not rush his work – a portrait of Spain’s royal family was unveiled in 2014, 20 years after it was commissioned.

And it’s not the first time Lopez has tried to take on the iconic square in the centre of the Spanish capital. “Puerta del Sol is a very old idea of mine and this is my third attempt,” Lopez said.

He first tried to depict the square more than 20 years ago. A second try coincided with construction work, which forced him again to abandon the painting. Now he has decided the time is right to resume the work he started in 2010.

“I hope that this is the definitive one that I can finally complete and take to the limit of what I can do,” he said.