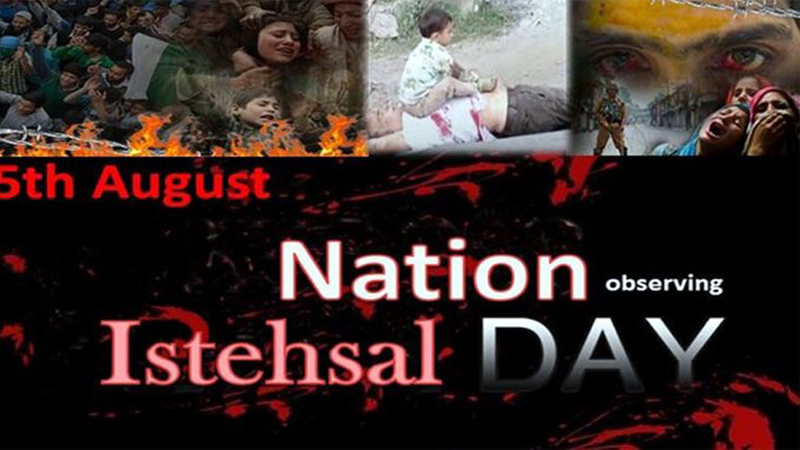 In Indian illegally occupied Jammu and Kashmir, Hurriyat leaders and organizations have said that the Kashmiris reject Narendra Modi-led fascist Indian government’s illegal and unconstitutional actions of 05 August, 2019 and will continue their struggle till they achieved freedom from the Indian yoke.

The Chairman of Islamic Political Party, Yousuf Naqash, in a statement in Srinagar on the completion of two years of Indian constitutional terrorism in IIOJK said the steps taken by India on and after August 05, 2019 in the occupied territory have no constitutional status. He said although some world powers are silent for the sake of short-term interests and seem to be allies of India, not only these countries but also their interests will be reduced to ashes in the fire that India intends to burn in the region.

“We not only appreciate the steps taken and efforts made by Pakistan in the aftermath of the August 5 tragedy, which is being celebrated as “Youm-e-Istehsal” but we are not ashamed to say that the result of Pakistan’s sincere efforts are commendable. We hope that despite all the difficulties and problems, Pakistan will continue its efforts in the future in a more effective manner regarding Kashmir and shaking the international conscience,” he said.

Naqash maintained that the Kashmiri will carry on their freedom struggle till it reached its logical conclusion without fear of Indian cruel and oppressive tactics. He also extended support to the Ashra-e-Mazahamet calendar issued by the All Parties Hurriyat Conference and said his party will play its role in making it successful in every possible way.

The Chairman of Peoples Political Party, Engineer Hilal Ahmed War, and Hurriyat leader, Javaid Ahmad Mir, addressing a gathering in Narakura area of Budgam highlighted the illegal, unconstitutional and unlawful measures of August 5, 2019 taken by fascist government of India. They said that these actions were aimed at changing the demographic composition of IIOJK. Engineer Hilal Ahmed War and Javaid Ahmad Mir along with a delegation visited the area to condole with Dr Hakeem Yaqoob the death of his mother.

The Acting Chairman of Jammu and Kashmir Muslim League, Abdul Ahad Parra, addressing party leaders in Srinagar said Modi regime’s illegal actions of 05 August, 2019 can neither change the disputed status of Jammu and Kashmir nor can they force the Kashmiri people to give up their freedom struggle. He deplored the silence of the world community, particularly the UN, on the Indian atrocities on the people of IIOJK. He urged the Kashmiris to observe August 05 as Youm-e-Istehsal and convey the message to the world that they will continue their struggle till the settlement of the Kashmir dispute as per the UN resolutions.

A spokesperson of Jammu and Kashmir Employees Movement in a statement issued in Srinagar said India has turned IIOJK into a military cantonment where Indian Army is involved in large-scale human rights abuses. He said that the Kashmiri people reject India’s illegal and unilateral move of August 5, 2019 and they will observe complete shutdown on Thursday to show their resentment against it. The spokesman said that following the fascist agenda of the extremist organization Rashtriya Swayamsevak Singh, the Modi government is depriving the Kashmiri people of all their basic rights. He appealed to the UN and the international community to play their role in resolving the Kashmir dispute in accordance with the Kashmiris’ aspirations.

Chairman of Islami Tanzeem-e-Azadi, Abdul Samad Inqilabi, in a statement issued in Srinagar said August 5 is one of the darkest days in the history of Jammu and Kashmir. He said by observing striking on the day, the Kashmiris will make it clear to the world that they should be granted their right to self-determination. He appealed to the UN and international human rights organizations to take cognizance of the Indian state terrorism in IIOJK.

Chairman of Jammu and Kashmir Tehreek-e-Istiqamat, Ghulam Nabi War, in a statement in Srinagar said that on August 05, 2019, India abrogated Articles 370 and 35A to further strengthen its illegal occupation on Jammu and Kashmir. He said since this unilateral and illegal move, the worst atrocities have been unleashed against the people of IIOJK. However, he added that the Kashmiri people cannot be intimidated by these brutal tactics.

General Secretary of Jammu and Kashmir Pir Panjal Freedom Movement, Israr-ul-Haq, in a statement issued in Jammu said that the Modi regime’s illegal move of August 5, 2019 has caused great damage to IIOJK and affected the lives of every citizen of the territory. He said that the Kashmir dispute should be resolved through dialogue.