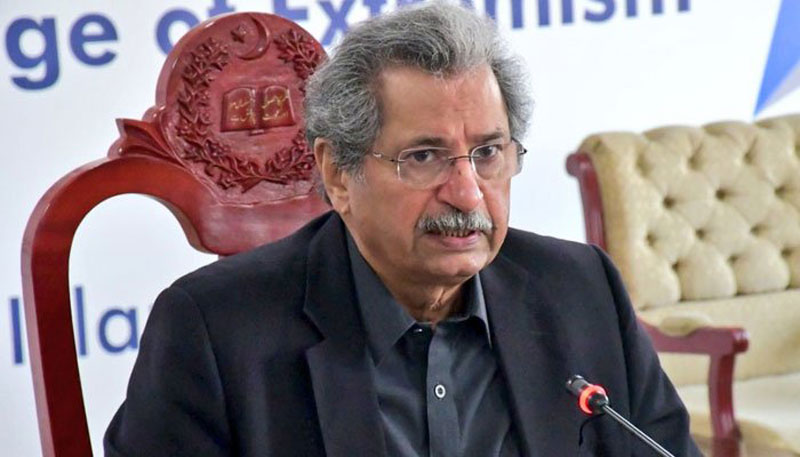 Minister for Federal Education and Professional Training Shafqat Mahmood Tuesday said that for the first time in the history of the country, single national curriculum (SNC), along with the model textbooks, teacher training modules and assessment framework were being developed.

In an exclusive talk with APP, he said that these four elements make the complete cycle of quality education.The process of development of SNC was being carried out in three phases, he pointed out. In the first phase, SNC for grade Pre-I to V has been completed. Practical aspects of ‘SeeratulNabi’ have been focused in the ‘Islamiyat’ curriculum while for the first time, separate curriculum for minorities has also been developed.

The minister said that the provinces and areas had remained an integral part of all the process of curriculum development.

Consensus among these stakeholders was a great achievement indeed, he explained.

Shafqat said that the documents of SNC were available on the Ministry’s website.

Single National Curriculum (SNC) Phase-I for Grade Pre-I to V, uniform curriculum at primary level was being implemented from the month of August, he said, adding, in 2nd phase, SNC for Grade 6 to 8 would be implemented throughout the country from Academic Year 2022-23 and for 9 to 12 from academic year 2023-24.

He said that these systems were poles apart and often result was different mind-sets thus fractured psyche of the nation.

Shafqat said that Single National Curriculum was aimed at providing equal learning opportunities to all classes of people. In addition, it would help the students and parents in case of inter-provincial mobility, he added.

Another envisioned benefit of SNC was national harmony and cohesion that would help build one nation, he remarked.

To a question, the minister said that the improving access with equity without compromising on quality and standards was one of the core strategic aims of higher education reforms.

He said, in that regard, numerous steps had been undertaken by the incumbent government for promoting higher education, research and development.

Currently, he informed, there were 229 Higher Education Institutions (140 Public and 89 Private) in the country.

As a result of these efforts, the access to higher education has improved from mere 2.6 percent to over 10 percent of the eligible age cohort i.e., 17-22 years.

To another query, the minister said the admissions to universities (discipline wise) were granted purely on merit and in accordance with the seats available in each discipline.

Shafqat said the federal government could not charter a university in any province after 18th Constitutional Amendment, while only a federal degree awarding institute for research and education could be established.

Establishment of a new university, within the geographical limits of a province, was the prerogative of the respective provincial government, he mentioned.