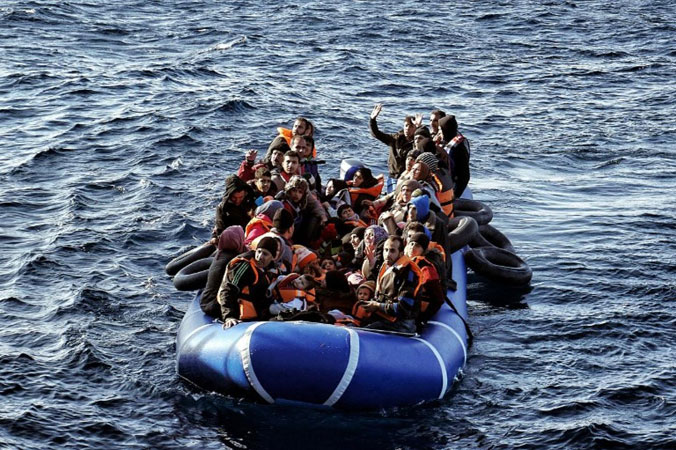 A search and rescue operation was underway on Friday by the Greek coast guard near the island of Lesbos, after a rubber dinghy carrying migrants capsized, Greek authorities said.

Ten people have been rescued so far, while three remained missing, according to what survivors told the Greek authorities.

The inflatable boat sank in Turkish territorial waters, along the maritime border between the Greek island of Lesbos and the Turkish coast, an official from the Greek coast guard told AFP.

One survivor swam into Greek territorial waters and was picked up by Greek authorities who then entered Turkish waters and rescued nine more people.

The Greek coast guard said it has informed Turkish authorities of the incident.

“The Greek coast guard, which puts the protection of human life above all, was forced to enter Turkish territorial waters, rescuing ten people,” Greek Migration Minister Notis Mitarachi said while speaking in parliament on Friday.

He added that Greece is effectively protecting its borders, as entries by migrants from Turkey to the Greek islands were 96% lower in the last 12 months.

Last Thursday a boat carrying 45 migrants sank off the coast of Crete. Thirty-seven people, were picked up by the Greek coast guard, while another were not found. The Turkish coast guard also assisted in that search and rescue operation.

Human rights organisations have repeatedly accused the conservative Greek government of forcing people back out of the Greek territorial waters, which is against international law.

Last month, Amnesty International in a new report accused Greek authorities of the “torture, ill-treatment and illegal pushbacks” of refugees and migrants to Turkey, arguing that the practice has become “de facto” border policy.

Migrants often use Turkey as a transit point to reach prosperous European Union states via Greece.

In 2016, Turkey inked a deal with the EU to stem the flow of migrants to Europe in return for some incentives including financial assistance.

Turkey currently hosts some 3.7 million refugees from the conflict in Syria.