Pakistan economy’s international performance indicators has improved a lot in the current government regime rising up from very desperate situation when they took over back in year 2013. Inclusion of Pakistan stock exchange in MSCI emerging markets, ranking 2nd in Asia and 5th all over the world in terms of stock market performance are significant milestones that exhibit inherent potential of our economy. On the other hand, at planning, administrative, security and behavioural levels there are deep routed problems that still persist and need consistent attention. Lets have a infographic and quantitative analysis of this year Federal Budget of PKR 4.7 Trillion that might be last budget of current government and through this analysis try to understand the problems faced by the Federal Government in its policy making, and measures taken to counter those problems, the improvement they have exhibit in specific areas over the last few years, sectors that need attention in terms of budgetary allocations and quality of budgetary reporting etc. 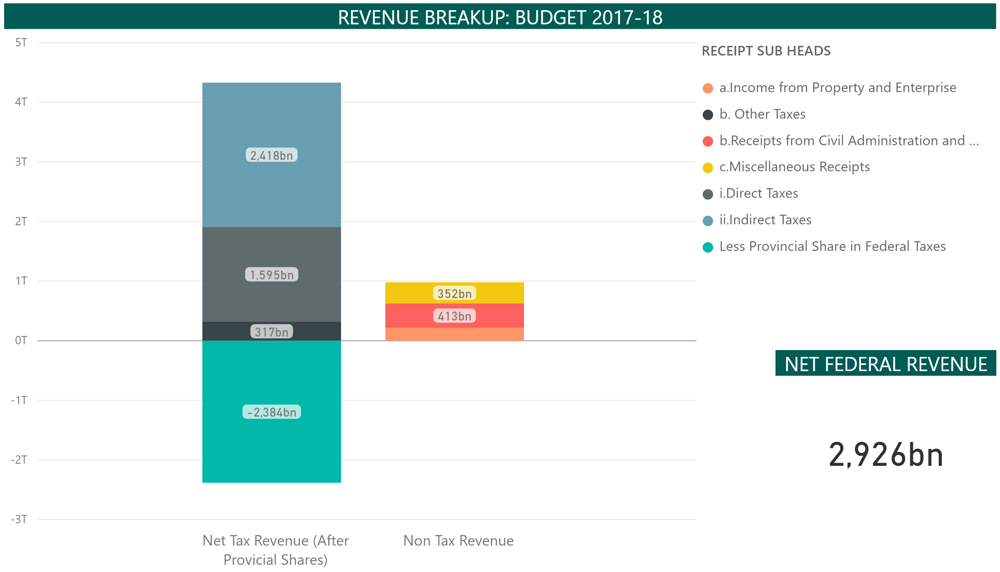 Before analysing the figures, notwithstanding fiscal analysis point of view, it is important to mention that the budget figures lack transparency when reviewed in detail with many significant amounts classified in unexplained account heads like ‘Others’ or ‘Transfers’ or other ambiguous names. Anyhow, we take what we get. Lets start with analysis 2017-18 budgeted figures in context of last year budgeted figures and performance of government since its inception. The first thing that strikes the senses regarding current year budget is the 14% increase in indirect taxation. Despite a lot of discussions and debates, the only practical tool to secure revenue appears to be indirect taxation no matter how inequitable that is perceived to be (An increase of PKR 355 Billion as compared to Budget 2016-17 i.e. from PKR 2.06 Trillion (34% of net total revenue) to PKR 2.42 Trillion (37% of net total revenue)). Resultantly the proportion of direct taxation has gone down from 25.9 % to 24.6% though the absolute amount has slightly increased (from PKR 1.56 Trillion to PKR 1.59 Trillion).

It appears that in the last couple of years Federal Government has surrendered to the difficulties faced in collection of direct taxation and reverted to the easy way out of burdening masses in general. In the first three years of current regime the proportion of indirect taxes in relation to overall tax revenue decreased from 56.5% to 51.4% that was a very healthy sign but then it rose up again to almost where it started (i.e. 55.8%). This is dispiriting especially when in established economies this ratio goes as low as less than 30% and we are not even marching towards that goal. The situation appears worse when we analyse ‘other taxes’ head further that is again another name for indirect taxes (7.33% of net total tax revenue; PKR 317 Billion in 2017-18). Indirect taxation slope got steeper in the last couple years rising from 27% increase to 68% increase (from baseline year 2012-13). On the contrary, direct taxation slope of baseline increase got flat in the current year rising only by 4% from baseline year 2012-13.

This is coupled with the fact that the concentration of direct taxation is being by policy design shifted from large corporations to smaller enterprises and individuals by reducing corporate tax rates and increasing indirect style of direct taxation for smaller units (e.g. withholding tax as final tax or minimum tax). It was argued that reduction in corporate taxation was being done to encourage businesses to incorporate and formalize their structures and that should in turn give greater direct taxation revenues owing to rate elasticity of business incorporation but in the hindsight it can be easily concluded that this reduction did not help achieving Government stated targets and instead aided in furthering imbalance between direct and indirect taxation.

Revised figures for Budget 2016-17 reveal similar trends highlighting imbalance between direct and indirection taxation. As it turns out, by setting lower targets and relaxed polices for direct taxation Government still has not been able to achieve those targets in the past years. In the year 2016-17 too, government failed to raise 1.56 Trillion as direct taxation target and fall short by PKR 180 Billion (11.5% less than target) Instead, it ended up compensating it partly by increasing indirect taxation (including other taxes) (PKR 48 Billion) (2% more than target). Indirect taxation that was planned to be 34% of the budget ended up being 37% until the date of budget. On the other hand, direct taxation that we planned to be 26% of the budget ended up in being 24% until the date of revised budget.

Analysis of differential cashflows explains that revenue short falls have been compensated by borrowing from local banks and Government intends to return the same in the next year. On the other hand, .low interest rates policy indicate that Government still expects to use local bank’s credit in the coming year.

Since Government has been able to extract more money out of indirect taxation it is trying to leverage that route at maximum potential. On the other side, for direct taxation goal is recover the lost ground as compared to previous year targets so previous years targets have been maintained with minor increases.

Following summarizes Federal Government performance of Year 2016-17 and goals for Year 2017-18 Government has not been able to meet its revenue targets and fell short fell short by 6.39%. So now in year 2017-18 it will have to achieve 14.2% from revised figure to meet its revenue target of 6.92% that makes it a daunting task. In this regard, heavy reliance has been placed on inequitable structural taxation. 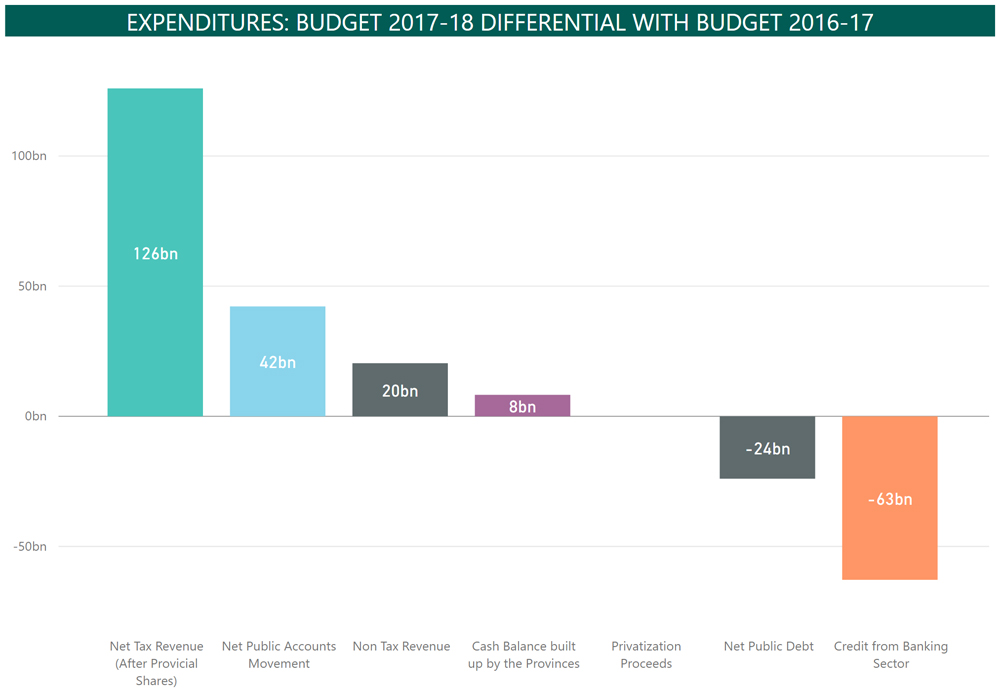 Equitable taxation tools or not, the most important of fiscal policy is to spend money raised efficiently and effectively. That takes us to expenditure side of the budget. Debt servicing constitute a very major part of Pakistan Budget. The budgeted figures are showing a significant decrease in this head that appears i.e. from PKR 1.8 Trillion (35.5% of overall expenditures) to PKR 1.65 Trillion (31.7% of overall expenditures). This appears to be good sign for the economy provided we are able to achieve this target. Another positive aspect of Budget 2017-18 is Government emphasis on spending more for development purposes. (Collectively about PKR 300 Billions more as compared to last year have been set aside for development purposes). This in theory can effect inflation in the coming period that is expected to be around 6% for year 2017-18 (especially when current period inflation was only 2.86% that is lowest for 47 yeas with CPI at 4.17%) but still assuming these development expenditures will render their benefits in due course, this policy on paper will be less inflationary as to compared to the situation when budget deficit is direct result of the overspending on revenue expenditures.

Keeping in mind productivity concerns, Pakistan’s single highest area for expenditure after debt servicing is Defence related divisions budget that is still on the rise (from PKR 858 billion (16.9%) to 918 Billion (17.7%). These increases appear to be inevitable given the on-hand war-on-terror. But in the long run, larger and larger chunks of these amounts need to be diverted for development purposes. Moreover, its not the Defence only, loss making divisions like Pakistan Railways and Pakistan International Airlines does not help the cause of self-sufficiency.

The overall analysis shows that Expenditure Budget 2017-18 is 2.17% more than last year budget and 4.13% more than current year revised budget owing to a shortfall of 1.89% which itself is significant amount especially when around 80% of the budget consists of Charged amounts and about 20% only are presented for Parliament approval. But the situation is more grave than this when we dive deep into the analysis of this shortfall.

As it turns out the reduction of 1.89% is net total of increase in unproductive revenue expenditures by % 0.46% of its huge baseline and 9.55% decrease in development expenditures. Though, the next year budget is promising a massive 27.5% above the last year budget and 43% more than revised budget to compensate for the lost ground. But the actual figures showing shortfalls are definitely a point of concern after all its not only what we plan, it’s what we execute on ground that will shape our economy.

Looking at the positive side, for the first time in a very long time our development budget will be greater than our capital borrowings that in turns indicate that we are a step closer on self-reliance. None-the-less, current expenditures are still being financed partly via Public Account Receipts and other non-revenue items by an amount nearing PKR 1 Trillion. If the government is able to achieve its next year financial budget, it will break a lot of psychological barriers for growth in the future periods. 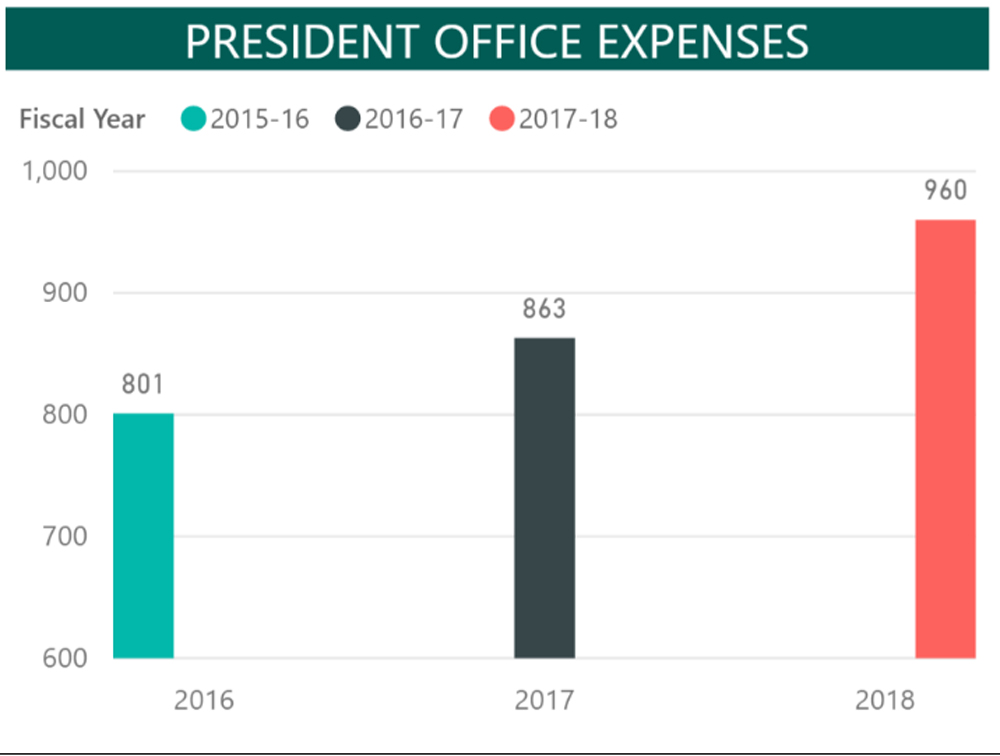 In a budget deficit country like Pakistan, it’s the message from the top that matters the most and helps in turn to create an environment where masses in general recognize their individual responsibility to contribute in reduction of the deficit. Hence the analysis of PM’s and President’s office expenses that quantitively might not appear to be material, are definitely material from qualitative perspective explained above.

Although the President office has been losing its relevance in terms of constitutional powers still its pace of increase in Cash outflows is increasing in more proportion then Prime minister office. From fiscal year 2015-16, President Office expenditures increased by 20% over the course from PKR 801 million to PKR 960 million, resulting in a compound annual growth rate (CAGR) of 9.48%. If that growth rate were to continue, these expenditures will cross PKR 1,000 Billion by fiscal year 2018-19. The proposed increase of 11% in next fiscal year is highest of past three years. On the other hand, the rate of increase of PM’s Office expenses since 2015-16 is at steady rate of 4.3%. 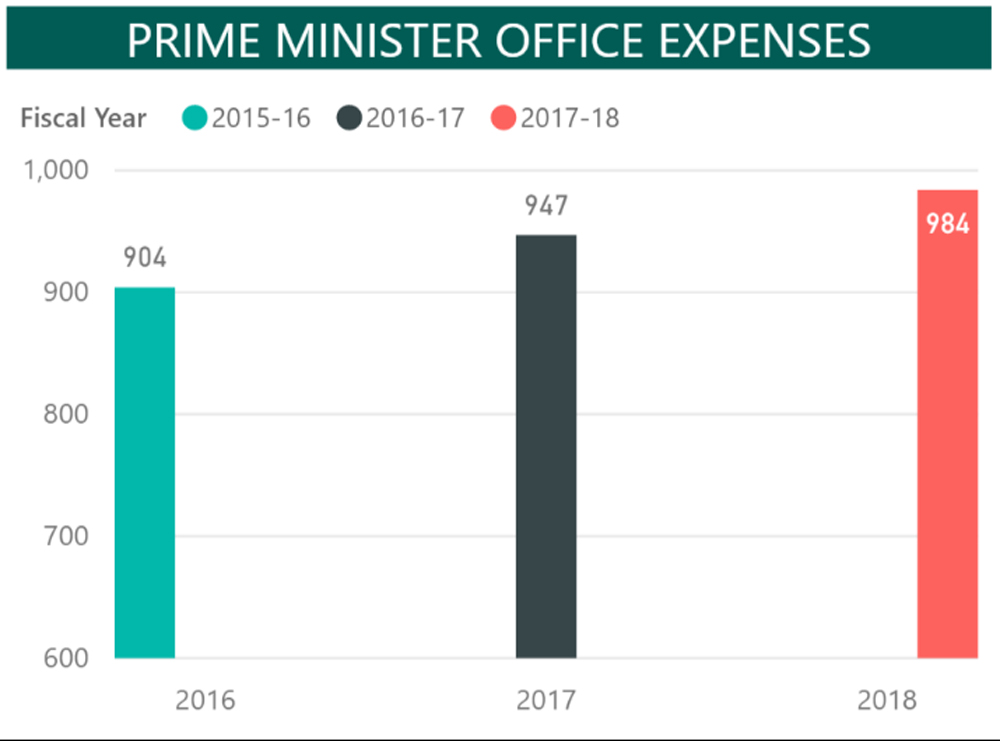 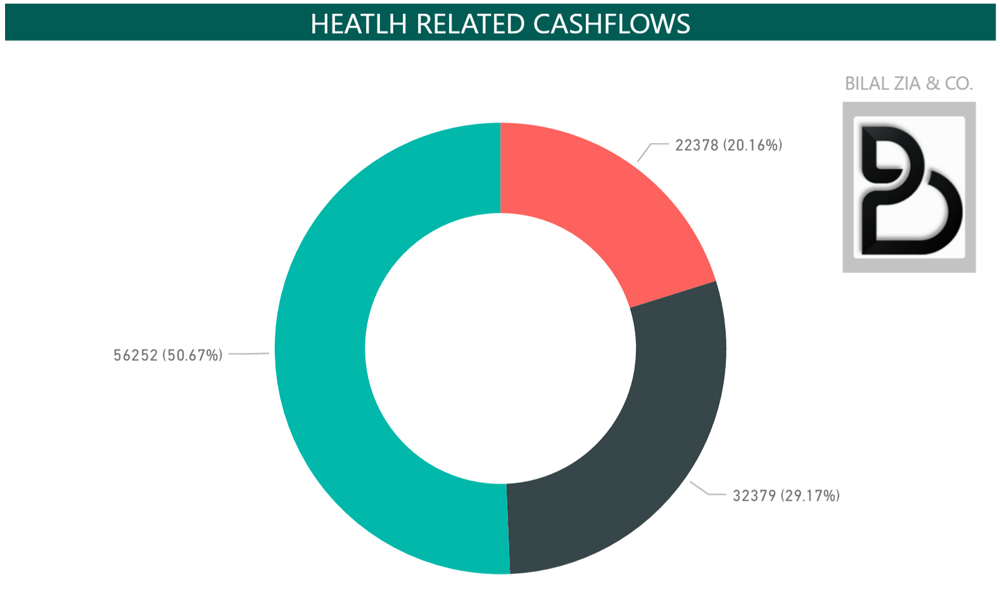 In the current budget for fiscal year 2017-18, there is massive proportional increase of 74% from previous year in Health Budget at PKR 56 Trillion. This is more than the combined value of previous two fiscal Years. Since 2015-16 planned expenditures rose by 151% over the course from 22,378 to 56,252, resulting in a compound annual growth rate (CAGR) of 59% and 74% for Budgeted Year. The amount will still be in the range of 1% of the overall budget that is about 3-4 times less than developed economies. So yes a lot has been promised in the current year but a consistent policy of increased spending on health will ensure decent standard of living in our home country. 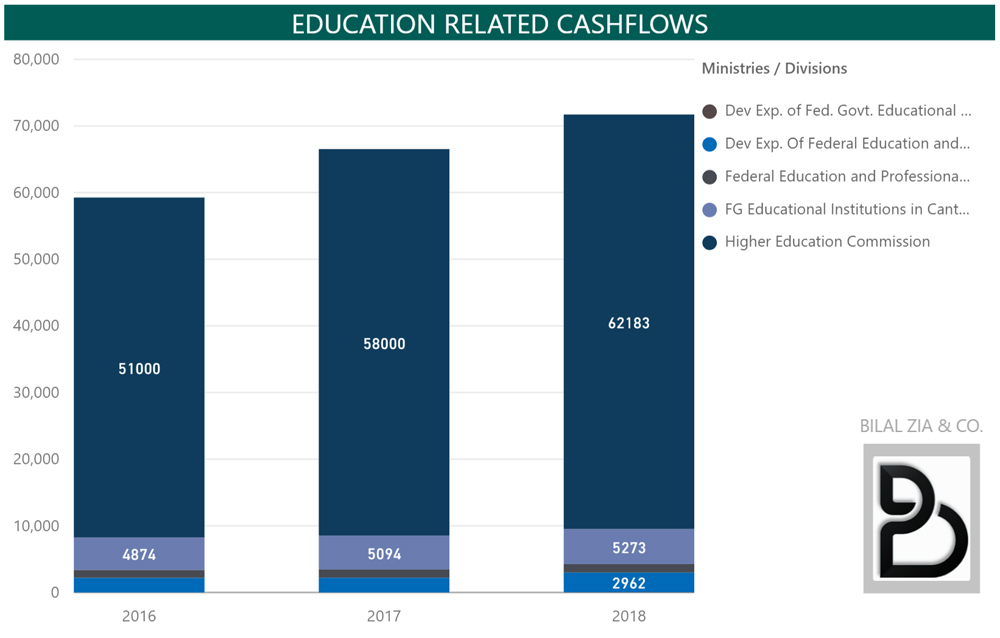 Societies and Nations thrive on the strength of its human resources. Governments in Pakistan are always criticized for their lack of attention on education sector. Hence in the recent past rate of growth of education spending has been targeted at higher level than average budget growth Since 2015-16 till current budget, planned expenditures increased by 21% from PKR 59,260 million to PKR 71,716 million, resulting in a compound annual growth rate (CAGR) of 10%. This is 1.7% of overall budget.

On overall level, this is an optimistic budget that is trying to rectify shortfalls of Year 2016-17 and then promising to add further on top of that via ambitious expense control and development plans. Aggressive development plans are essential need of Pakistan Economy that requires around 4 million jobs each year On the other hand, this much spending comes with a risk of inflationary pressures, the single digit target for which is 6% for the fiscal year 2017-18 that will be a challenge to maintain. Higher development allocations in this year are probably because this is the last year before elections and Ministers and other MNAs will be announcing development packages for their respective constituencies as part of their election campaign. Revenue side presents much bigger concerns with revenue targets on direct taxation falling short and growing reliance on indirect taxation that is a probably policy shift in inequitable direction or given the uncongenial circumstances, a necessary evil to toe the wheel of economy.