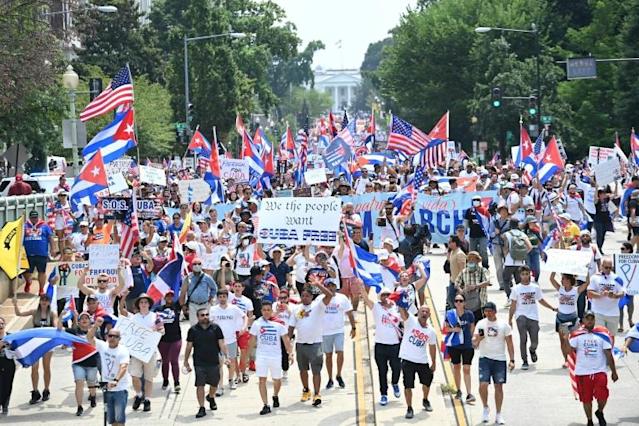 Hundreds of Cuban Americans, political refugees and activists marched on the US capital Monday to protest against the Cuban government and its crackdown on anti-communist demonstrations earlier this month.

Cubans from across the United States waving “freedom” signs and Cuban and American flags gathered outside the White House to demand President Joe Biden take action against the island’s regime. Human rights groups accuse Cuba’s rulers of using censorship and fear tactics to repress historic anti-government demonstrations — the biggest protests since the revolution that brought Fidel Castro to power in 1959.

“We decided to come to get the attention of the American people,” said Carlos Rodriguez, 29, who flew to Washington from Miami to show his support. “We need (the White House) to declare the Cuban government illegitimate,” said Elena Cruz, 32, a Florida-based realtor who left Cuba at 16 years old. On July 11, scores of demonstrations erupted across Cuba triggered by economic strife, medical and food shortages and anger at the regime. Clashes with police left one person dead, while the ensuing crackdown targeted hundreds of others arrested and charged with contempt, public disorder, vandalism and negligent conduct in the midst of the Covid-19 pandemic.

Amid the crackdown, internet blackouts made it difficult for families to stay in touch. Rodriguez managed to reach his relatives in Cuba, who side with protestors but are afraid to speak publicly. “We’re just peacefully here protesting, like what we have the right to do in this country,” he said. “We don’t have it in Cuba.”

Several expats recalled personal stories of repression inflicted by the Communist Party. Miami native Kiele Cabrera, 24, spoke out in memory of her father and grandmother — both of whom were persecuted for opposing the government. “Everybody here has an intense story like mine, and we still have people on the island that are still being oppressed by those same exact people for however many years,” she said. The march, which ended at the Cuban Embassy, was planned for Cuba’s Day of the Revolution, a national holiday celebrating Fidel Castro’s first attack against the Batista government. The United States has voiced support for the Cuban people, imposing sanctions last week on Cuba’s defense minister. Biden warned the sanctions will be “just the beginning” of measures against the Communist Party. “As we hold the Cuban regime accountable, our support for the Cuban people is unwavering,” he said.