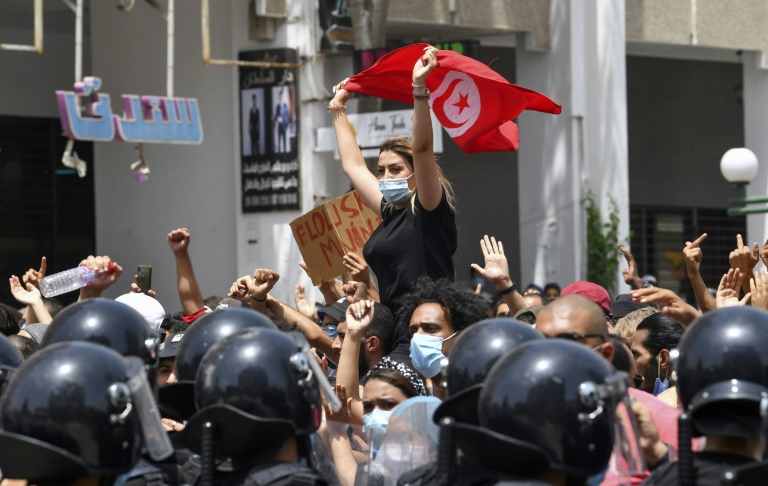 Tunisian President Kais Saied announced Sunday the suspension of the country’s parliament and the dismissal of Prime Minister Hichem Mechichi following a day of protests against the ruling party.

Car horns sounded after Saied made the announcement following an emergency meeting at his palace. Earlier, thousands of Tunisians had marched in several cities protesting about government failures in the North African nation and crippling coronavirus rates. In the capital Tunis, hundreds of protesters had gathered in front of parliament, shouting slogans against the Islamist-inspired ruling Ennahdha party and premier Mechichi, with the crowd call for the “dissolution of parliament”.

Tunisia has been overwhelmed by Covid-19 cases, including more than 18,000 people who have died in a country of around 12 million. Protests were also reported in the towns of Gafsa, Kairouan, Monastir, Sousse and Tozeur. “The constitution does not allow for the dissolution of parliament, but it does allow for its work to be suspended,” the president said, citing Article 80 which permits such a measure in case of “imminent danger”.

Saied said he would take over executive power “with the help” of a government headed by a new chief appointed by the president himself. He also said that the immunity would be lifted for parliamentary deputies. Despite a decade passing since the 2011 revolution which overthrew dictator Zine El Abidine Ben Ali, Tunisia remains prone to chronic political turmoil that has stymied efforts to revive crumbling public services. The country’s fractious political class has been unable to form lasting, effective governments. Since Saied was elected president in 2019, he has been locked in a showdown with Mechichi and parliament speaker Rached Ghannouchi. Their rivalry has blocked ministerial appointments and diverted resources away from tackling Tunisia’s many economic and social problems.