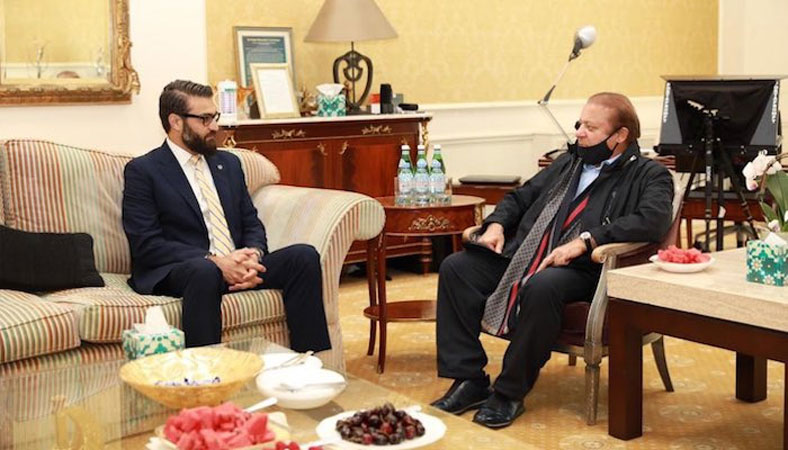 In a public speech two months back in eastern Nangarhar province, next to the Pakistani border, Mohib had not only repeated his allegations about Islamabad ‘not wanting to work with a Pashtun leader in Afghanistan’ but had also called Pakistan a ‘brothel house’. His remarks had outraged leaders in Pakistan, and Islamabad had cut off ties with his office.

Addressing a press conference, Fawad questioned whether the PML-N leader who had remained prime minister thrice should hold meeting with anti-Pakistan foreign officials/nationals. He asked the PML-N leadership whether their party supremo had informed them about the meeting beforehand. “Did he even inform the PML-N’s central executive committee?” he asked. “PML-N should inform the people whether the party’s CEC had was apprised about the meeting or not,” he said, adding that Nawaz had met a person whose “ties with India were no secret”. He demanded that the audio transcripts of Nawaz’s meeting be made public.

The minister said the transcripts of Nawaz’s meeting with Indian tycoon Sajjan Jindal were yet to be made public. “In her book, Indian journalist Barkha Dutt wrote that Nawaz through Jindal had informed Modi that the army was in his way.”

The minister said after meeting with Nawaz, the anti-Pakistan Afghan official also met Indian secret agency personnel. He said the meeting has “damaged Islamabad’s security doctrine” as the man had earlier issued anti-Pakistan remarks. “When two or three, who have started following the extremist ideology of Modi, meet Nawaz, then this circle [getting together] raises questions and damages our security doctrine,” he said.

He said Nawaz Sharif is a fugitive and was living in the apartments which he had purchased through looted public money. He said Prime Minister Imran Khan neither held secret meetings with anyone nor gave statements against national institution.

He said Hamdullah Mohib had off and on expressed his hatred and used derogatory language against Pakistan. Pakistan had disconnected all its contacts with the Afghan advisor’s office and made it clear to the Afghan leadership that there would be no talk with Hammaullah Mohib, he added.

The minister said families of Afghan’s officials Hamdullah Mohib and Amrullah Saleh were living abroad and they (Hamdullah-Amrullah) had nothing on stake as they were on some special mission. “Amrullah Saleh and other people like him should have retrospect as to why they could not bring stability in their country despite remaining in power for 20 years,” he added.

He said Pakistan has always supported Afghanistan in hour of need and hosted over five million Afghan refugees for many years. He said more than 6000 Afghan students were getting education in Pakistan and thousands were getting medical treatment in its hospitals. “We provided them an opportunity so they can lead successful lives,” he said, adding that Pakistan is committed to durable peace in Afghanistan.

Fawad said Prime Minister Imran Khan has also made it clear that Pakistan had no favorite Afghan group as it was with the whole Afghan nation. He said that currently Pakistan is facing conspiracy from India which used the soil of neighbouring country on the Western border for subversive activities in Pakistan. Pakistan, he said, has always desired to have good relations with India but unfortunately extremist elements (RSS) were in power there.

Chaudhry Fawad said sending Nawaz Sharif to go abroad was dangerous as such people became helpful in international conspiracies. In a tweet, he said meeting of Nawaz Sharif with Hamdullah Mohib, a biggest ally of Indian intelligence agency RAW in Afghanistan, is a major manifestation of that kind of activity. “Modi, Mohib and Amrullah Saleh, enemies of Pakistan, are friends of Nawaz Sharif,” he added.

In a development that has sent shock waves across Pakistan, the London-based PML-N leader was met by Mohib and State Minister for Peace Sayed Sadat Naderi. The National Security Council of Afghanistan (NSCA) gave an update about the meeting on Twitter, saying that the Afghan state minister for peace and the national security adviser discussed “matters of mutual interest” with the former Pakistan prime minister. Officials on both sides agreed that they would both benefit from the “policy of mutual respect and non-interference in each other’s internal affairs,” the NSCA was quoted as saying by Indian news agency ANI. They also noted that “strengthening democracy” will put both neighbours on the path towards stability and prosperity.