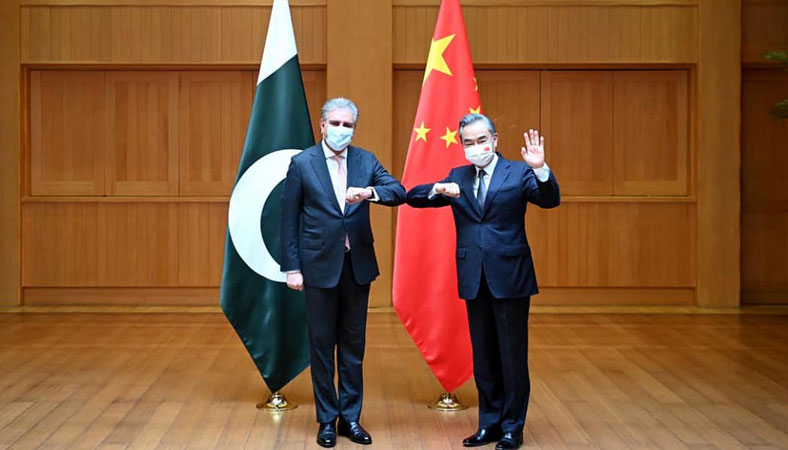 The foreign minister on his Twitter handle posted that both sides also discussed the Covid-19 pandemic, peace and reconciliation in Afghanistan and international and regional issues of mutual interest. The foreign minister said that he also offered condolences on the loss of precious lives caused by torrential rains in Henan province. He said that they agreed that peace and stability in Afghanistan was vital for socio-economic development and prosperity. They also called on all Afghan stakeholders for ceasefire and to work closely together to achieve a comprehensive, inclusive, and negotiated political settlement which should be Afghan-led and Afghan-owned. Both sides shared similar outlook for a peaceful, stable and prosperous South Asia.

Later, addressing a joint presser along with his Chinese counterpart, the foreign minister expressed satisfaction over the ties between the two countries. He said on the issue of bilateral ties, they were satisfied that these were moving in the right direction. All the strategic, economic and security cooperation between the two counties was moving ahead with determination, he said, adding that both sides in their bilateral meeting held co-shared their point of views on further strengthening of this cooperation. He said their delegation-level talks were held in a very friendly and cordial atmosphere in which both sides reiterated support to each other. Qureshi assured the leadership of China that Pakistan and China “are friends and will remain as friends … let the world know that we are trusted friends.”

The foreign minister also thanked the Chinese leadership for their reiterated commitment to the issue of Jammu and Kashmir. He demanded that India should revoke its unilateral and illegal actions of August 5 on Indian Illegally Occupied Jammu and Kashmir and restore its status. He also expressed his gratitude to China for its firm support to Pakistan in dealing with Covid 19 and by supplying doses of coronavirus vaccines. This year, Pakistan and China are celebrating the 70th anniversary of the establishment of diplomatic relations. More than 100 celebratory events have been planned of which over 60 events have already been held so far. These celebrations have immensely contributed to injecting a fresh vigour and warmth in the traditional friendship.