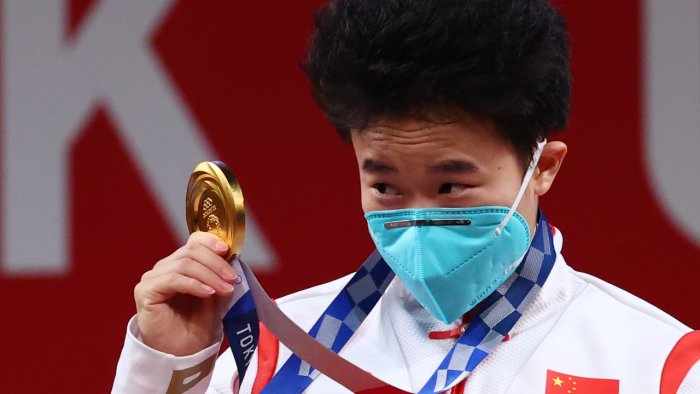 China claimed the first two gold medals of the Tokyo Olympics on Saturday as cyclist Richard Carapaz became just the second competitor in Ecuador’s history to top the podium, with victory in the road race.

As the troubled build-up to the pandemic-postponed Games gave way to the first full day of sporting competition, China claimed victories in shooting and weightlifting. Yang Qian sparked the mini gold rush in the 10-metre air rifle competition, pipping Russia’s Anastasiia Galashina with a dramatic last-shot victory. Galashina had looked poised to claim the title heading into the last shot, but stumbled with 8.9 on her final effort to allow Yang to seal victory. “It’s the 100th birthday of the Chinese Communist Party,” she said. ” I’m so happy that this golden medal is a gift to my country. I’m so proud.”

There was more joy for China, with Hou Zhihui taking gold in the women’s 49kg weightlifting event with an Olympic record total of 210 kilograms. In cycling’s gruelling road race, 2019 Giro d’Italia winner Carapaz outfoxed a heavyweight field led by Slovenia’s Tour de France champion Tadej Pogacar. It was only Ecuador’s second gold at the Olympics after Jefferson Perez’s victory in the 50km race walk at the 1996 Atlanta Games. South Korea got off the mark by taking gold in the mixed team archery competition.

While Japanese have been barred from Olympic venues due to Covid-19 restrictions, the road race was a rare chance for the host nation’s fans to glimpse the sporting action. Tens of thousands of cheering spectators lined the route of the brutal 234km (145-mile) course to watch as Carapaz prevailed in a thrilling tactical battle. “It’s an incredible moment for me,” Carapaz said. “You always have to believe. I have worked so hard to be here and it’s a huge moment for me.” But as China and Ecuador celebrated, there was disappointment for Japan as gymnastics star Kohei Uchimura crashed out of the horizontal bar competition.

The all-around 2012 and 2016 Olympic champion, who was due to retire after these Games, lost his grip during his routine and failed to make next week’s final. “In the last three Olympic Games I’ve been able to match the level of performance I’d reached in training — but not this time,” a dejected Uchimura said. While 11 gold medals were to be decided on Saturday as attention pivoted to sport, the spectre of Covid-19 continued to stalk the Games. German cyclist Simon Geschke was forced out of the road race while Dutch rower Finn Florijn has also tested positive. Seventeen new Games-related cases were announced on Saturday, taking the total number to 123, of which 12 are athletes.

Organisers were also nervously tracking the progress of a Tropical Storm heading towards Tokyo, with weather officials saying it could arrive on Tuesday. As a “protective measure” organisers have brought forward to this weekend rowing events that had been scheduled for Monday. Elsewhere on Saturday, world number one tennis star Novak Djokovic stayed on course for a “Golden Slam” with a comfortable 6-2, 6-2 defeat of Bolivia’s Hugo Dellien in the opening round of the men’s singles tournament. Djokovic, who has already won the Australian Open, French Open and Wimbledon titles this year, is bidding to win all four majors in a calendar year as well an Olympic gold, emulating the feat of German great Steffi Graf in 1988.

Naomi Osaka, fresh from her starring role lighting the Olympic cauldron in Friday’s opening ceremony, starts her bid to win gold for Japan on Sunday. Swimming begins later with heats in the men’s 400m individual medley, where Japan’s Daiya Seto is the favourite, before Sweden’s reigning champion Sarah Sjostrom, still recovering from a fractured right elbow, lines up in the women’s 100m butterfly. Britain’s Olympic and world champion Adam Peaty is the one to watch in the men’s 100m breaststroke, while Hungarian great Katinka Hosszu starts her fifth Games in the women’s 400m medley. The US women’s football team and former world player of the year Megan Rapinoe will look to bounce back from a humbling 3-0 loss to Sweden when they take on New Zealand.