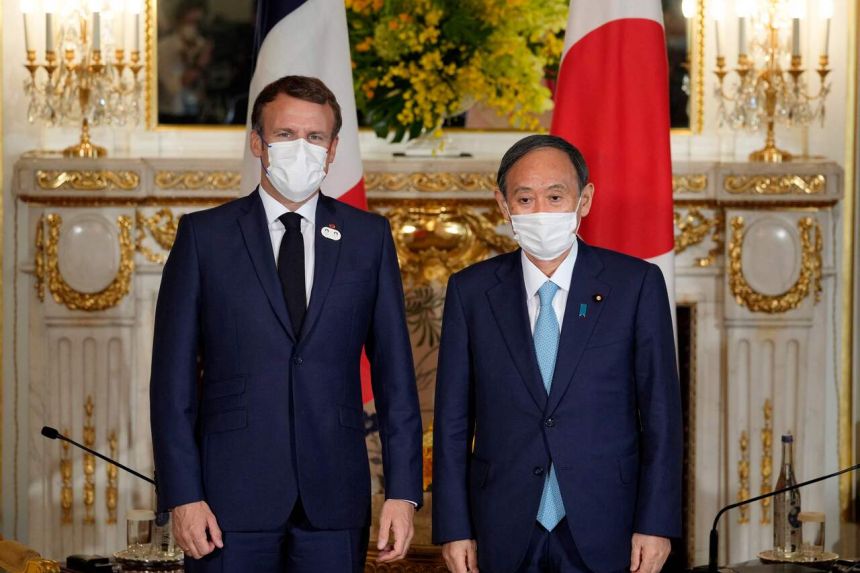 Macron is in Tokyo for the virus-postponed summer Games, with the 2024 edition of the sporting extravaganza set to take place in Paris. He was one of around 1,000 officials and VIPs, including US First Lady Jill Biden, in the stands for Friday’s opening ceremony. Regular ticket-holders were barred to limit the spread of Covid-19 as cases surge in the city, forcing almost all Games events behind closed doors. On Saturday, Macron held talks with Prime Minister Yoshihide Suga and top executives from some of Japan’s biggest businesses.

The French president hailed the two countries’ “exceptional” relationship after meeting Suga. “At a time when we are all fighting against the virus, striving for recovery, this partnership is a strength,” he tweeted. Macron and Suga wore masks and exchanged a double fist-bump in lieu of a handshake. Tokyo is currently under a virus state of emergency, which limits alcohol sales and restaurant opening hours. Coronavirus rules have forced Macron to reduce his delegation to a minimum, and he is travelling with just a single minister.

The president on Saturday went to watch Olympic judo events — a highly popular sport in France. French judoka Teddy Riner is attempting to become the first heavyweight to win three Olympic titles. In a joint statement, Macron and Suga repeated their commitment to a “free and open Indo-Pacific”. They said they discussed the fight against climate change, which “is not a constraint but an opportunity for innovation and job creation”. Their statement also touched on the issue of parental abduction in Japan, which does not offer joint custody for children in cases of divorce or separation. “The two countries are working to strengthen their dialogue while prioritising the children’s best interests,” it said. The subject has been in the headlines since a French father in Tokyo began a hunger strike to win access to his children, who he says were abducted by their Japanese mother. Vincent Fichot has not seen his two children in nearly three years and began a hunger strike outside the Olympic Stadium on July 10. Macron’s advisors met with Fichot on Thursday.