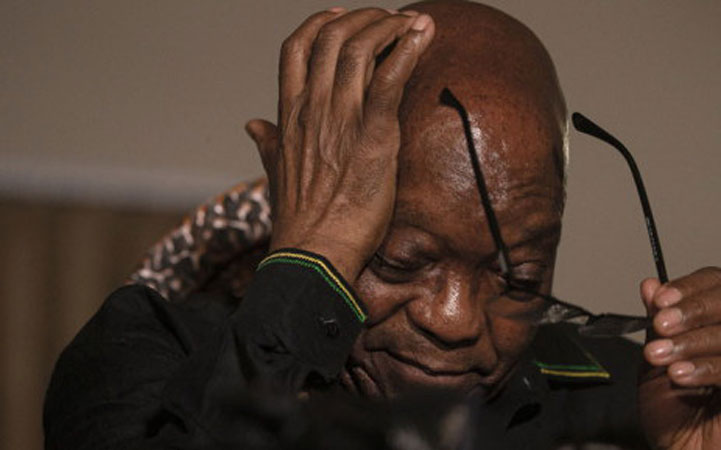 A long-running corruption trial of South Africa’s jailed ex-president Jacob Zuma will resume virtually on Monday, despite deadly violence that swept the nation after his imprisonment in an unrelated case.

Zuma faces 16 charges of fraud, graft and racketeering related to a 1999 purchase of fighter jets, patrol boats and military gear from five European arms firms when he was deputy president. He is accused of taking bribes from one of the firms, French defence giant Thales, which has been charged with corruption and money laundering. The trial started in May after numerous postponements and delays, as Zuma’s legal team worked fervently to have the charges dropped. The 79-year-old Zuma appeared in person for the opening and said he was innocent. Thales also pleaded not guilty, and the next hearing was set for Monday. But things took a nasty turn when on June 29, Zuma was found guilty of contempt of South Africa’s top court for snubbing graft investigators probing his tenure as president. He was jailed a week later. The incarceration sparked protests in his home province of KwaZulu-Natal, which snowballed into a week of looting and arson that spread to the economic hub Johannesburg, claiming over 200 lives.

South African President Cyril Ramaphosa, who came to office promising to curb graft, said the riots were a “coordinated and well-planned attack” on the country’s young democracy. “Using the pretext of a political grievance, those behind these acts have sought to provoke a popular insurrection,” Ramaphosa said on Friday night. Monday’s hearing could reignite tensions that had eased late last week, analysts warn.

“People will be watching the behaviour of judges,” said Sipho Seepe, a fellow of the University of Zululand in KwaZulu-Natal. “If they feel justice is not done, they will protest.” Monday’s hearing will focus on an application by Zuma’s legal team for chief prosecutor Billy Downer to remove himself from the case over claims he leaked information to the media. “We will argue vigorously for the application to be dismissed,” National Prosecuting Authority spokesman Mthunzi Mhaga told AFP.

The trial will be heard virtually to “avoid disruption”, Mhaga said. Zuma supporters are still likely to gather in front of the Pietermaritzburg High Court to show support, as they have during past hearings. Zuma’s lawyers claim the virtual format is unconstitutional and have applied for the trial to be adjourned. His foundation confirmed on Twitter late Sunday that the ex-president would attend Monday’s hearing virtually “for the postponement application of his trial”.

Zuma and his supporters have repeatedly dismissed all the probes as politically motivated and warned his jailing would spark unrest. But they deny being behind the recent turmoil. Carl Niehaus, a close friend of Zuma, told reporters this week that there was no “coordinated campaign to lead to looting and violence”. “There is however an uprising of people who are deeply concerned and angered by [his] imprisonment.”

Zuma, once dubbed the “Teflon president”, is meanwhile seeking to reverse his 15-month jail sentence. He was arrested for disobeying a Constitutional Court order to testify before a judicial panel probing the plunder of state coffers during his nine-year rule. Most of the transgressions investigated by the commission involve three brothers from a wealthy Indian business family, the Guptas, who won lucrative government contracts and were allegedly allowed to choose cabinet ministers. Zuma only testified once in July 2019.

South Africa’s ruling African National Congress (ANC) party forced Zuma — who is a member of the country’s dominant Zulu ethnic group — to resign in 2018 after mounting graft scandals. But Zuma has retained a fervent support base within the ANC and among the general public, viewed by many as a “people’s man” and a defender of the poor. Ralph Mathekga, author of “When Zuma Goes”, says judges in the graft case will not bow to “political pressure”. “Not prosecuting Mr Zuma will have serious implications for the rule of law,” he told AFP. “The judiciary is going to have to ride the storm.”