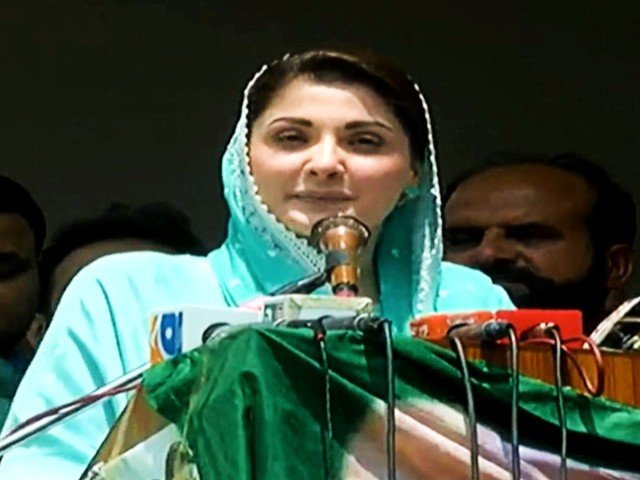 PALANDRI: Addressing a public gathering at Palandri in Azad Jammu and Kashmir (AJK),Pakistan Muslim League-Nawaz (PML-N) Vice-President Maryam Nawaz said on Thursday that the day of reckoning of Pakistan Tehreek-i-Insaf (PTI) government was near.

Travelling from town to town as part of the campaign for the elections due to be held there on July 25, Maryam said it is the fear of defeat in the upcoming general elections that has forced the PTI government to introduce electoral reforms.

“Let me tell you that electoral reforms are not a machine. These are the manifestation of people’s power,” she commented.

“Now when they have lost occupied Kashmir to India, they have set their eyes on Azad Jammu and Kashmir,” she said, and asked the forces ‘inimical’ to the PML-N not to become an obstacle in the way of party’s ascent to power. “If you tried to steal elections from the PML-N, you will have no place to hide,” she warned.

The PML-N leader and vice president said she would inform her father, former prime minister Nawaz Sharif, that his slogan ‘Vote ko Izzat Dau’ had reached every nook and corner of Azad Kashmir as the entire AJK is chanting the slogan.

She accused the government of mortgaging the projects completed by Nawaz Sharif. “Prices of life saving drugs were increased 10 times,” she regretted, and alleged that the government had even tried to kill her father while he was in jail.

Maryam said she had learnt that the government was going to increase prices of petroleum products today (Thursday), adding that increase in the prices did not affect Prime Minister Imran Khan since he did not travel on cars but on bicycles.

She also alleged that the conspiracy to ‘sell’ Kashmir to India was hatched in the USA as well as conspiracies against her father, Nawaz Sharif were designed on several occasions.

She taunted that PM Imran had Nawaz Sharif ‘phobia’.